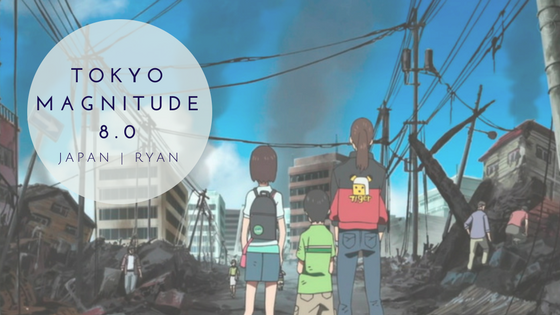 Earthquakes. This might be the first word that would come out to your mind once you hear or read the title of this anime, but this anime is more than that. Tokyo Magnitude 8.0 narrates the frustrations of a middle school girl named, Mirai, who had wished something that caused catastrophe. Cliché as it may sound, but the first two chapters of this anime series teach the viewers to be careful what you wish for. No, this anime series is NOT A FANTASY.  The scene that involves wishing is just pure coincidence.

The anime portrays the realistic after-effects of the massive earthquake that hit the artificial island of Tokyo, Odaiba Island. Mirai and her brother, Yuuki, happened to be in Odaiba for the robot exhibition when the earthquake occured. The siblings journeyed their way home in Sategaya with the help of the motorcycle delivery woman and also a single mother, Mari, who was striving to find her daughter and her mother at her hometown in Sangenjaya. So, this anime is not all about the rants of Mirai about her life, but the journey of Mirai, Yuuki, and Mari as they find their way home through the ruined city to reunite with their loved ones. It depicts importance of life, survival, compassion towards others, and family.