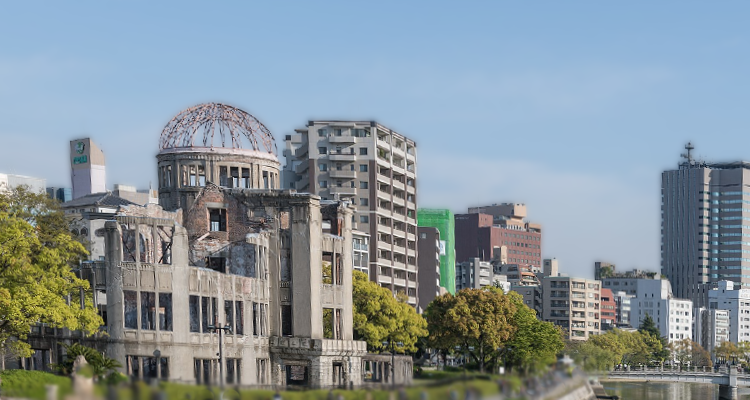 Hiroshima is home to over 1.1 million people today, despite the destruction and devastation wrought by the atomic bomb dropped on the city in 1945. The city’s central park is a surreal memorial dedicated to peace and remembrance.

What to see in Hiroshima

Hiroshima’s Peace Memorial Park (平和記念公園, Heiwa Kinen Kōen) is centrally located and one of the most important features of the city. The park takes over 120,000 square meters, or over 26 football fields of space. It’s so centrally located that you’re likely to find the park even without looking for it. It’s landscape, walking paths, and flowers sit in stark contrast to the heavy metropolis of the downtown.

In 1944 the center of Hiroshima was filled with bustling commercial and political buildings. The heart of the city operated from the area that is now the Memorial Park. This area was specifically chosen for the atomic bomb as it was the heart of the city.

Four years after the bomb was dropped and redevelopment would start, it was decided that the area would not be redeveloped for commercial purposes but would be forever dedicated to future peace.

The most memorable site for many is the A-Bomb Domb, aka the Hiroshima Peace Memorial, which is all that remains of the former Prefectural Industrial Promotion Hall. The building once served to promote industry, and when the bomb exploded it was one of very few buildings to remain even partially standing. The dome is now a UNESCO World Heritage Site.

A Peace Memorial Museum sits in a key location of the park overseeing the rest of the park. The museum offers a look into the aftermath of the bombing and explores the history of the atomic bomb. There are many gruesome pictures on display as a stark reminder of the grim reality of war and the destructive devastation caused by the atomic bomb. The human suffering caused by the dropped bomb is a key focus of the museum.

Hiroshima Castle (広島城, Hiroshimajō) is one of those rare castles built on plains in the center of the city as opposed to fortified on a hilltop or mountainside. Its main keep is five stories tall, and the castle grounds are surrounded by a moat. Based on its design, the castle was likely built more to keep peasants under control and house nobility rather than to repel invaders. The flat land adjacent to a river would also be easy to build on and defend.

Hiroshima’s industrial and economic growth centered around the castle, built in 1589 by Mori Terumoto. The town thrived with the castle acting as a central hub and seat of power in Western Japan.

It was spared demolishment during the Meiji Restoration and in fact became a national landmark and housed imperial soldiers during the way. The wooden castle was destroyed by the atomic bomb, and the one today is a recreation of the original.

Hiroshima Rebuilt After the Bomb

After the war, major rebuilding efforts were taken to rebuild the city. Some scientists predicted that radiation would make the city uninhabitable, but this proved false due to the way the explosion occurred so high off the ground and the way the radiation dissipated. So soon the monuments of Hiroshima’s ancient heritage including the Castle and Shukkeien Garden were rebuilt.

In the center of the city, directly under where the blast occurred, a large park dedicated to remembrance and promoting peace would be created, leading to the Hiroshima Peace Memorial Park.

Why is there no radiation in Hiroshima?

Many people are still scared of travelling to Hiroshima even though they shouldn’t be. They ask me why isn’t the radiation in Hiroshima dangerous? But Hiroshima doesn’t have more radiation than any other place in the world. To know why you need to know a little science.

Radiation is dangerous due to the emission of ionizing radiation, which are particle-waves that move fast enough to strip electrons from atoms. The amount of ionizing radiation produced by a specific element corresponds to that element’s half-life. Uranium and plutonium have long enough half lives (tens of thousands of years) that small amounts of it in the ground and atmosphere do not contribute significant amounts of radiation. The reason other nuclear incidents are more dangerous is because they release far more kinds of elements, some of which with half lives from 8 days to a few years, making these particles far more dangerous to human health.

But more than just that, the atomic bomb exploded very high above Hiroshima, meaning most radioactive material was blown away into the atmosphere rather than remaining in the city.

When is the best time to visit Hiroshima?

I recommend visiting when the Sakura trees are blossoming in March.