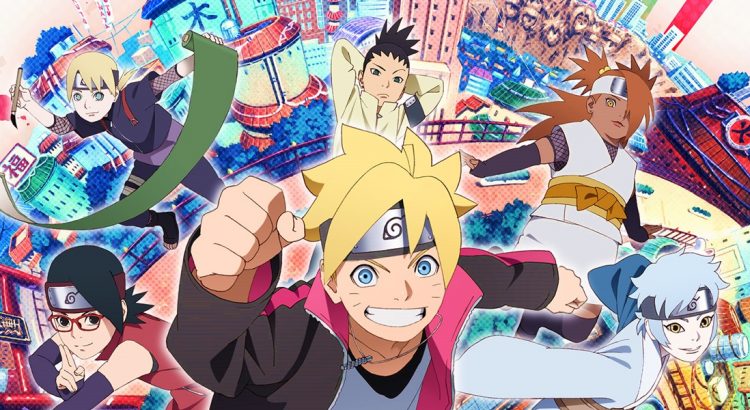 Boruto: Naruto Next Generations is a manga & series written by Ukyō Kodachi and illustrated by Mikio Ikemoto. It is said to be a spin-off and a sequel to Naruto since this series continues the life-story of Uzumaki Naruto as he gets in the after-marriage life. The main character, Boruto is Naruto’s son in the world of this anime. And I have to say since Naruto was very popular, this series is also a big hit!

The main characters of the series are the new generation after Naruto’s. Filled with adorable & funny moments, mysteries to be unlocked & action, this series is a must watch! The characters inside the anime have this mixed personality from their parents which make it funny and interesting. For example, Boruto’s sister Himawari has Hinata’s hair & cuteness but is mixed with Naruto’s hyperactive personality.

Now, let’s get to know the other characters in this anime!

Naruto and Hinata’s son. Born shortly after his parent’s wedding and the eldest child of the Uzumaki Family. Boruto used to look up to his father when he was very young but soon his admiration changed to resentment when Naruto was appointed Hokage. Due to the Hokage’s heavy workload, Naruto found himself unintentionally neglecting his family, causing Boruto to lash out with pranks to get his father’s attention. Boruto ended up hating the Hokage’s job and makes it known that the Hokage is something he NEVER wants to become, causing some friction with his teammate Sarada, who DOES admire the position and wishes to become it someday.

After the events of his own movie, Boruto eases up on his father and comes to understand the hardships of Hokage, thus restoring his happy relationship with Naruto again.As far as ability goes, he proves to be much more talented compared to his father, but unlike him, he doesn’t really like to train and doesn’t really want to be acknowledged by anyone. This makes him rather unmotivated to train and progress, which all changes after Momoshiki’s attack on Konoha. Now, Boruto’s dream is to become as strong as his teacher Sasuke and protect his home from the shadows.

Sasuke and Sakura’s daughter. Sarada is the youngest current user of the Sharingan. She knows Boruto because their parents are friends but she thinks he’s an idiot. Living alone with her mother Sakura, Sarada was rather unmotivated in her early ninja life until she met her father Sasuke.

She has a big admiration for the 7th Hokage and wants to be Hokage herself. She uses mainly fire attacks with taijutsu inherited from Sakura.

A close friend to Boruto and a fellow teammate on Team Konohamaru, who transferred from the Hidden Sound Village.  Mitsuki was created synthetically by Orochimaru and after many times having his memories erased finally decided to run away from Orochimaru and live his own life. Unbeknownst to him, this is exactly what Orochimaru wanted him to do, and set him out on the course for Konoha to find and befriend Boruto Uzumaki, for Mitsuki’s own sake.

After being accepted into the village, Mitsuki graduated the Ninja Academy and formed a team led by Konohamaru Sarutobi with Boruto Uzumaki and Sarada Uchiha.

Shikadai is known as the son of Shikamaru Nara and Temari Nara. The famous Fifth Kazekage, Gaara of the Sand, and his brother, a puppet master, Kankurou, are his uncles.

One of the things that make his character attractive is his parallel personality of laziness like his father.  Since he is Boruto’s close friend even before their school years, he has this hobby of reprimanding and advising, much like what his Father do. He’s also known to be brutally honest just like his mother, telling Boruto the blunt truth as a warning before he does his pranks. He also has an I.Q. which is above 200 (like his father) and can be crazy prepared if he wants to.

His team will be called as ‘Team Moegi’ and his teammates will include Inojin Yamanaka and Chōchō Akimichi. This team pretty much resembles like his Father’s in his youth, since his teammates are from the lineage of Ino Yamanaka, Inojin’s mother, and Choji Akimichi, Chōchō’s father.

Inojin is the son of Ino Yamanaka and Sai Yamanaka. During the series, we can notice a lot of family resemblance, which includes, Sai’s clothing style and skin paired with Ino’s blonde hair and eyes. He is also known to be the ‘pretty young man’ among his peers.

His personality which he got from his father, mainly includes being brutally honest, having strong artistic sense and being skilled in close-quarter combat. Some personality from his mother can be traced with his style of ditching, complaining and motivating. He has great ninja skills other than mentioned, like having medical ninjutsu’s and mastering the secret technique of the Yamanaka clan.

He is a part of the Team Moegi, along with Shikadai and Chōchō.

Chōchō’s parents were Choji Akimichi and Karui Akimichi. She’s actually an acrofatic and an attractive character. Acrofatic means someone who can move like a gymnast or sprint so fast despite their fat physical appearance. Also, the anime team admits that she is attractive and cute with her curviness. She has the same personality with her father, especially about the eating habit that runs in their family. On the side of her mother, she got that innocently insensitive and eccentric personality.

Other than being an acrofatic, she is known to be a size shifter called the ‘Partial Expansion’ technique which she clearly got from her father. She has that striking power, but one of her disadvantages is her poor stamina.

She is the younger sister of Boruto and the youngest child of Naruto and Hinata. She mainly helps her mother in the household chores and is very caring and sensitive towards her brother, Boruto. She’s also known to be very adorable but dangerous at the same time when being pushed to her limit. One time, when Boruto tears her beloved stuffy Panda, her Byakugan was suddenly unlocked and she tries to attack Boruto after that. She was even able to knock out her father, the seventh hokage and the hero, so hard on the stomach that even Kurama was sent down along with it.

But Himawari is a very hyperactive character and tends to do very cute actions that even her brother, Boruto, commented about it.

There are also a lot of other characters in the series that you will surely love! You have to watch out for these following:

And of course, the main characters of the Naruto Shippuden characters are also included! Which I assure you, is a great show. Definitely a must-watch!

If you like ninjas, you could check out the Ninja Museum in Kyoto if you ever get to visit Japan. Or you can read a bit about Naruto too.

8 thoughts to “Boruto: Naruto Next Generations”