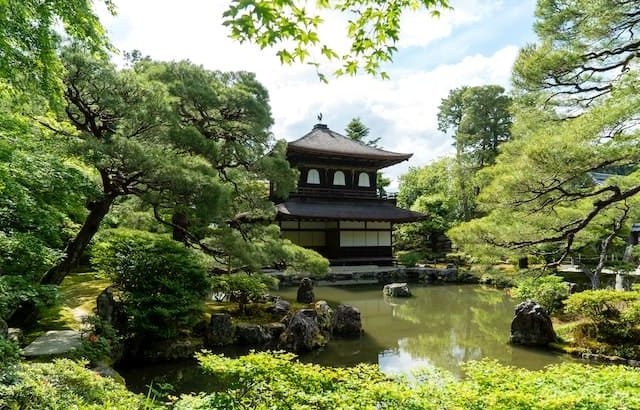 Sister to Kyoto’s Kinkaku-ji, Ginkaku-ji is a temple situated in northeastern Higashiyama. Associated with the Rinzai sect of Zen Buddhism, it is officially known as Jisho-ji. While modeled after the Golden Pavilion and is also renowned for being the Silver Pavilion, people that have seen the temple in person will notice the lack of anything silver in its exteriors.

Known for its understated elegance, Ginkaku-ji is considered to be the pinnacle of the wabi sabi aesthetic. The art pertains to looking for beauty in imperfection and is typified by a sense of transience, elegance, and restraint. As such, the temple is most famous for its simple buildings and stone gardens. Originally intended as a villa for Ashikaga Yoshimasa, he lived here from 1484 until he died in 1490. It was then converted into a Buddhist temple to honor his wishes.

Today, Ginkaku-ji is one of the most famous spots in Kyoto. People that want to avoid the usual hordes of tourists that tend to inundate Kinkaku-ji often come here. After all, the pavilion was modeled after it. If you’re planning on visiting this Kyoto gem, here are some interesting facts you might want to know.

A brief history of Ginkaku-ji

When Shogun Ashikaga Yoshimasa decided to build Ginkaku-ji in 1482, he decided to have it modeled after the Golden pavilion, his grandfather’s villa. The place remained his residence and was only converted into the temple it is now known after his death in 1490.

Ashikaga Yoshimasa’s stint as a shogun is not remembered fondly by history. Considered to be highly lacking in terms of leadership, he was a poor and inept ruler. His time as shogun was rife with instability and conflict. It was said that he was more interested in his quest for beauty than in pursuing the intricacies of politics.

However, what he lacked in leadership, he made up for in his patronage of the arts— a contribution to Japanese culture that may be better appreciated today. Through the temple, the Higashiyama culture flourished after his death. The influence wasn’t just limited to those in the aristocracy but to the rest of the public as well. It was during this time that numerous Japanese arts were developed and fine-tuned including the noh theater, ikebana flower arranging, architecture, and the intricate tea ceremony.

No silver on the Silver Pavilion

While Ginkaku-ji has always been referred to as the Silver Pavilion, people may be surprised to find that the structure does not have any silver in it or on it at all. There were, however, plans to have the main building coated with silver leaves when it was being built. It is, after all, the sister structure to the Golden pavilion which is literally covered in gold.

Unfortunately, during Ginakaku-ji’s construction, funds run out. As such, the plans of draping the building with silver coating never materialized. Not to be deterred, the designers decided to coat the main building with a dark paint coating. This is intended so the moonlight will get reflected off of the black paint, which would then create the appearance of the structure giving off a silver glow under the light.

When Ginkaku-ji was built, two different architectural styles were used. This combination led to a perfect blend of the country’s art history. The shingles on the temple roof were made of Japanese cypress. Instead of metal nails, bamboo nails were used to secure the barks. This is because metal nails will eventually rust, and the builders didn’t want to ruin the wood. A statue of the Buddhist goddess of mercy “Kannon” is housed inside the pavilion. It is an important part of the pavilion although the public is not allowed to view it.

One of the first things that would come to mind when seeing the pavilion for the first time is how relatively simple it is. This is especially true if one were to compare it to the grandiose Kinkaku-ji. However, it is this simplicity that gives Ginkaku-ji that profound artistry and aesthetics that sets it apart from the rest of Kyoto’s vibrant shrines and sublime temples. Over the years, the Japanese have been known to master the “grace in restraint” ideology and the Silver Pavilion is one shining example of that.

What makes Ginkaku-ji appealing to so many who have personally seen it in person is its understated aesthetics and simple elegance. Admittedly, some who have seen the grand Kinkaku-ji might feel a bit underwhelmed with the lack of adornment of the Silver Pavilion, many people also share it is this very aspect that has endeared the temple to them.

The Silver Pavilion has earned the designation of a National Treasure. Built during the Muromachi Period, it is recognized for its relevance in preserving its culture. The age was well-known for having blended the monk, court noble, and samurai warrior cultures. It was also during this time when much of the beloved Japanese culture that is cherished today was developed.

Wabi sabi aesthetics defines Ginkaku-ji. Its faded wooden panels used to be covered in black lacquer to give it that silver glow under the moonlight. Meanwhile, its stone garden was deliberately designed to invoke emotions of renewal and cleansing.

Perhaps one of the most notable aspects of the temple is the dry garden. Named the Sea of Silver Sand, it’s made of raked white sands with a towering cone that is landscaped as the perfect moongazing spot. The sand pyramid is supposed to be a representation of the famous Mount Fuji. The dry garden, on the other hand, is meant to mirror a famous lake in Hangzhou in China. Both the sea of sand and the sand cone are symbols of enlightenment. The moon, along with its reflection, symbolizes the illumination of one’s consciousness.

Soami, a renowned Japanese landscape architect, supposedly designed the moss garden on the temple grounds. It’s a nice little nook that makes it so easy to feel like the rest of the world has gone away. It also features a little stream that flows down the hill, with tiny bridges arching over the stream. The design represents beauty as one ages. In Zen Buddhism, this is known as impermanence.

Right beside the moss garden sits the reflective pond. Around it, grow well-trimmed trees that cast their beautiful reflection on the mirror-like water. The especially vibrant colors of the trees make for such a striking spectacle.

Hondo or the main hall is situated right next to the sand garden. Unfortunately, the building is not accessible to the public. However, it is still possible to admire its exquisite woodwork from a distance. Back in the day, this is where Yoshimasa learned the intricacies of the Japanese tea ceremony. He was fully obsessed with the whole process and the setting involved. He was so intent on perfecting his performance that he dedicated his retirement to doing so. The doors in this hall are opened just slightly to give visitors a tiny peek of the tearoom which Yoshimasa designed.

Also within the temple grounds is Togudo. Intended as a jibutsudo, it is a special room or hall where a statue of Buddha is kept. In the past, the Buddha Amitabha was housed here. This part of Ginkaku-ji was given a national treasure designation as it is a historical structure representative of the period when it was built.

Ginkaku-ji happens to be along a walkway that has since been known as “The Philosopher’s Path”. The stone walkway is two kilometers long and leads to the Nanzen-ji area. It was named as such because Nishida Kitaro, a well-known philosopher, used to walk the path when doing his meditations.

The path is surrounded by nature lined by cherry and maple trees. In spring, the cherry blossoms cover the path in beautiful white and soft pink petals. In autumn, the maple leaves turn red, which makes for such a magnificent sight. It is a great spot to enjoy a stroll, especially if you want to take a break or just wind down for a bit. Do note that it does get a bit crowded here, especially in spring. So, be sure to time your visit well.

While Kyoto has more than its fair share of wonderful shrines and temples, one stop you shouldn’t miss is Ginkaku-ji. A striking contrast to the splendor of many of the city’s other well-known structures, it is a great reminder that there is beauty and artistry in simplicity. After you’ve taken in the wonderful views at Kiyomizu-dera and had your fill of the old-world charm of Gion, a visit to Ginkaku-ji is a great way to top it off. It’s the perfect spot to reflect on how lucky you’ve been to experience this truly wonderful side of Japan.