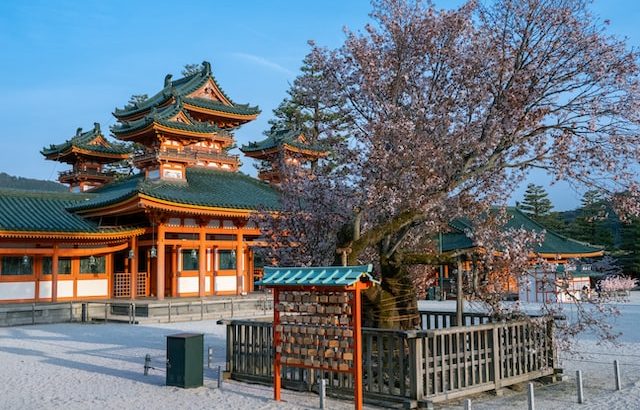 As Japan’s premier religious hub, Kyoto has around 2,000 shrines and temples that attract thousands of visitors every year. While its Buddhist temples tend to get a lot of attention, its more than 400 shrines dedicated to the Shinto faith are equally impressive. If you’re having a hard time narrowing down your options, read on as we look into some of Kyoto’s most iconic Shinto shrines.

One of Kyoto’s most impressive and beautiful attractions, it is also the most important shrine in the city. Always a favorite among locals and tourists alike, visitors come in hordes to visit Fushimi Inari Shrine all the time. Dedicated to the deity of success in business and good harvest, it is where the god Inari is enshrined. It is also the chief of all the Inari shrines across the country.

Located in the southern part of Kyoto, it is convenient enough to access from Kyoto Station. Perhaps the most notable feature of the shrine is its senbontorii, the seemingly never-ending path lined with torii gates. Aside from Inari, four other deities are worshipped at the shrine. Aside from being a public shrine, it is also an Imperial Court shrine. This is why in ancient times, emperors used to make donations here.

A shrine with an incredibly long history, it has long been established way before Kyoto became the country’s capital. The shrine’s path leads to the top of Mount Inari with numerous otsuka or stone altars dotting the way. With around 10,000 torii gates lining the path up the 233-meter mountain, it is one of Kyoto’s most iconic spots.

Located in the village of Kibune, Kifune shrine is famously known for its iconic stone steps with red lanterns lining each side. Dedicated to the worship of the god of water, this memorable shrine is nestled in a dreamy village where cedar forests and ryokan are aplenty.

According to the local legend, the shrine was marked by a goddess on a yellow boat that arrived in Kibune. The original shrine’s location, known as okunomiya is located about a kilometer from the road. Here, the remains of the goddess’ yellow boat are covered and marked by large stones.

People involved in the food industry often come to the shrine to offer prayers for the success of their businesses. A unique paper fortune or omikuji is featured in the shrine. People who want to know their fortune can blank piece of paper for 200 yen. The fortune then appears once the blank paper is floated on the water in the fountain at the shrine.

If you plan on visiting Kifune-jinja, the best time to head there is in August. Any time of the year when the heat is not that intense is also an ideal time to head there. Autumn is also a great time to visit the shrine. This is when the leaves of the maple trees surrounding the area turn into a variety of dazzling hues and colors. It makes the visit feel even more surreal and magical.

An impressively large shrine, Heian Jingu Shrine is located close to the Kyoto Imperial Palace. It offers stunning Japanese maple trees (momiji) and sakura trees along with beautiful ponds and gardens for visitors to explore. The shrine was erected in commemoration of Kyoto’s 1100th anniversary as the country’s former capital. Compared to other ancient shrines in Kyoto, it is relatively recent.

Built in 1895, it is built to commemorate Emperors Kammu and Komei , the city’s first and last emperors. Heian Jingu Jinja is also recognized as a Beppyo Jinja by the Association of Shinto Shrines. This means that it is the highest-ranked shrine in the country in terms of its cultural and historical importance. Japan also recognizes it as an important cultural property.

People visiting the shrine are in for a treat courtesy of the lush gardens surrounding its main buildings. The area does require an admission fee, but it is worth it. At 33,000 square meters, it is a splendid scenery. In spring, its famous trail made up of 300 cherry trees comes into bloom, which makes for an exquisite sight for hanami viewers. Autumn is also another ideal time of the year to come and visit as the leaves of the momiji trees transform into exquisite fall colors.

A well-known social and spiritual hub, Kamigamo Shrine is one of Kyoto’s sacred hearts. Famous for its spacious grounds, the shrine covers a total of 660,000 square meters. This encompasses even the mountain it is nestled in. Kamigamo shrine is surrounded by a quiet neighborhood three and a half kilometers up from the Kamogawa River. It is accessible by local buses and trains.

Every fourth Sunday of the month, a handicrafts market is hosted within the shrine grounds. Considered Kyoto’s oldest shrine, it’s been around long before Kyoto was established as Japan’s capital. It also plays host to one of the biggest festivals in Kyoto known as the Kamo Festival or Aoi Matsuri. Taking place every May, the festival is highlighted by a parade from Kyoto’s Imperial Palace to the shrine. Over 500 participants garbed in Heian period aristocratic style take part in the revelry.

When visiting the shrine, you can also check out the neighborhood of traditional houses near the site. These places used to be the residence of Shinto priests connected with the shrine. Due to its cultural significance, the area has since been designated as a Traditional Residential Area by the Japanese government.

One of Kyoto’s most revered religious sites, Yasaka Shrine is known for being almost always buzzing with activity. Flocked regularly by devotees asking for blessings and offering prayers for good fortune, the shrine is accessible by train, taxi, or bus from Kyoto Station.

Locals lovingly refer to the shrine as Gion-san. Its main hall is 360 years old, and its most iconic feature is perhaps its well-photographed towering red gate. A vermillion gate marks the entrance of the shrine grounds which feature a central stage with lantern adornments and an impressive offering hall.

Yasaka Shrine is most renowned for being the birthplace of one of the most famous festivals in Japan— Gion Matsuri. Taking place in July, the festival sees the entire Kyoto taking part in the celebrations and the revelry for an entire month. July 17th is the most notable date as this is when the shrine’s deity is paraded in a procession through the city. People from all over and out of the country flock to Kyoto to revel in the color, pop, and energy of the festivities.

One of the two Kamo shrines along the Kamogawa river, it is also considered one of the country’s oldest Shinto shrines. Along with the Kamigamo shrine, it was constructed around the 6th-7th centuries in a bid to protect the city against any evil influences. A World Heritage Site designated by UNESCO, it is famously sheltered by the forest of Tadasu no Mori.

Known for its winding streams and surrounding greenery, the shrine also has a smaller shrine where visitors are known to pray for beauty. The buildings inside the shrine complex are typical representations of the classic vermillion and white-colored structures that Shinto architecture is known for. Particularly striking are its highly arched taikobashi bridge and its two-storied gate.

A subsidiary shrine known as the Mitarashi-sha shrine can also be found within the property. It’s particularly notable for its picturesque location, situated right over an underground spring. Smaller shrines dedicated to the signs of the Chinese Zodiac can also be found within the complex. As a testament to the shrine’s important role in the past, one of Kyoto’s major festivals, Aoi Matsuri makes a stop at Shimogamo Shrine as it makes its way to the Kamigamo Shrine.

As Japan’s former capital, it is not surprising that Kyoto played a significant role in Japanese culture, history, and religion. Today, while Tokyo much of the focus is focused on Tokyo as the country’s capital, Kyoto’s old-world charms remain as irresistible as ever. When you’ve had your fill of contemporary Japan from trips to Tokyo, Osaka or any of its more modern cities, a visit to one of the many exquisite Shinto shrines in Kyoto is a great way to reconnect with Japan’s deep spiritual and historical past.