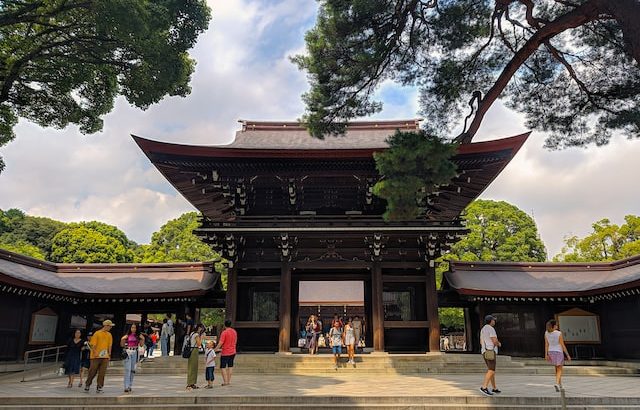 Japan is home to an estimated 80,000 shrines. A clear reflection of the country’s Shinto roots, these shrines were settings for festivals and rituals in celebration and worship of the Shinto gods.

The modern-day Japanese may no longer be as keen on incorporating Shintoism into their day-to-day lives. However, the reverence and respect accorded to these shrines of worship are still very much part of the culture.

It is common practice to bring a newborn to a shrine to receive blessings. The Japanese also have this custom of visiting a local shrine during the new year to pray for prosperity and good fortune.

While Kyoto may be home to many of the most famous shrines in the country, Tokyo has its fair share too. In fact, it just wouldn’t be possible to walk around the capital without seeing a shrine. Every village or city across the country will at least have one.

While there is never a shortage of fun things to do when in Tokyo, visiting shrines around the capital is a good way of immersing yourself in the rich and fascinating history of the country. As shrines are considered sacred, you’ll experience how the locals pay their respects and reverence when you chance upon them during your visit.

It doesn’t hurt to know a few tips on the proper etiquette when visiting a shrine. For instance, bowing before and after you pass through the torii gate. Torii gates mark the entrance of these shrines and with its vermillion color, it’s quite hard to miss.

Before entering the shrine’s main hall, you must purify yourself on the temizuya by washing your mouth and hands. White papers called shimenawa, are often hung around certain areas around the shrine. They are markers to signify that a spot is sacred and hence, should not be crossed.

If you want to experience Tokyo beyond its megalopolis glory, a visit to the many shrines that pepper across the metropolis is never a bad idea. Below we list down some of the top shrines that are worth checking out if you’re looking for some downtime.

Dedicated to the worship of the Meiji Emperor and the Empress Shoken, his wife— Meiji Jingu-jinja is one of the most famous shrines in the country. Being an imperial shrine, it is not surprising at all that it sees the most visitors during the new year.

The shrine is right beside Yoyogi Park and Harajuku Station, which makes it very accessible to any Tokyo visitor. It is certainly a must-see with its tight connection to the Japanese culture and incredibly impressive structures. Also, the site is known to host traditional Japanese weddings.

Located in Akasaka, this shrine is dedicated to general Nogi Maresuki and has quite a bit of a dark history. The general is most noted for his loyalty to the Emperor Meiji. Such is his loyalty that upon the emperor’s death in 1912, he committed seppuku.

The shrine welcomes visitors all year round. However, the place where the seppuku happened is only open to public access on September 12 and 13— the eve and the actual date of the suicide.

Built around the 12th century, it is one of the 10 shrines surrounding the Imperial Palace in Tokyo. A shrine honoring the god of food, it is easily distinguishable by its large torii gates with pillars carved with dragons.

Admission to the shrine is free and while it is right smack in the middle of the capital, it is usually empty. It only tends to bustle with activities during festival seasons. Also, the vicinity surrounding it has many restaurants and shops, making it an ideal stop if you have had a busy day.

This peaceful shrine is just a short distance from Ueno Park and the Yanaka neighborhood. Perhaps one of Tokyo’s oldest shrines, it is not known to a lot of tourists. This makes it an ideal option if you’re not a fan of large crowds.

What’s remarkable about this shrine is its tunnel of torii gates. If you really want to make the visit even more special, you can time it around April. The area transforms into a scenery of purple, white, and pink as the azalea bushes bloom. In fact, the shrine is a must-visit for flower viewing in the spring.

Dedicated to those who died in Japan’s war, some may consider the shrine as more political than religious. Settled atop the Kudanzaka slope, it is quite close to the Imperial Palace.

The grandiose layout and the towering torii gates give Yasukuni such a commanding presence. On the shrine grounds are numerous memorials and statues, all connected to the country’s war history.

The shrine also hosts a war museum. It is also the site of the Mitama Matsuri in July. It’s a very popular event which thousands of youth clad in yukata take part of.

Built around 730, it is considered to be another of Tokyo’s oldest shrines. It played a very prominent role in the Edo period as Tokugawa Ieyasu used to pay his respects here.

People that come to the shrine pray to the gods Ebisu and Daikokuten. They are the god of business prosperity and fisheries and the god of matrimony, bountiful harvests, and good fortune respectively.

The shrine is conveniently located in Akihabara, which is considered the mecca for every tech lover. If you’re shopping for electronic devices in Akiba and want them to last longer, it is a must to visit the shrine. They sell good luck charms or omamori for blessing electronic goods!

The shrine’s direct translation means “protection from waves”. This is very fitting considering how it was built right at the water’s edge in the middle of the 1600s.

Set right next to the fish market in Tsukiji, it is the marketplace and its merchants’ guardian. The shrine’s close proximity to the fish market means there are tons of sushi-related items on its ground. A variety of stone sculptures known as tsuka of eggs, sushi, clam, angler, and shrimp populate the shrine grounds.

Located between Roppongi and the Imperial palace grounds, the shrine is known for the red torii gates that line its stone staircase. Dedicated to the God of Mount Hie or Kami-no-Hie, Tokugawa Ieyasu used to worship here.

The shrine not only boasts a long and colorful history. Inside, it houses a variety of cultural assets as well as a national treasure. Ancient swords are also contained within the shrine which visitors may be allowed to view. The shrine is also the site of the Jinko Festival as well as one of the three greatest Tokyo festivals, the Sanno Festival.

It is believed that this is where Oonamuji-no-Mikoto, Kushiinadahime-no-Mikoto, and Susanoo-no-Mikoto are enshrined. People that come to worship the shrine believe that it will help them find a good match in marriage.

Originally, the shrine was established in Hitotsugi-ga-hara in Toshima. However, through the orders of the 8th shogun, Tokugawa Yoshimune, it was moved to its current location in 1730. A reflection of the frugal and simple policy implemented by Yoshimune, the shrine is also known for its rather simple, subdued design.

Five small shrines are also inside the premises, along with a fox hall. The unique atmosphere that the area gives off is one of the many reasons it is a must-visit for the deeply spiritual. In addition, it is home to a ginkgo tree, 25 meters tall, and around 400 years old. Now that’s a tree that has seen a lot of history!

A welcome break from the hustle and bustle of Tokyo

There is no way you can say your trip to Tokyo is complete without visiting at least one of its many shrines. It doesn’t matter whether you are deeply religious and spiritual or not. There is just something serene and peaceful about seeing these shrines in person and experiencing for yourself the deep history each of these sites holds.

Not only is it a window to the heart, soul, and history of Japan and its people. It is a very welcome break too for those that want to get away, even just for a few hours, from the flurry of never-ending excitement, fun, and activities in downtown Tokyo.