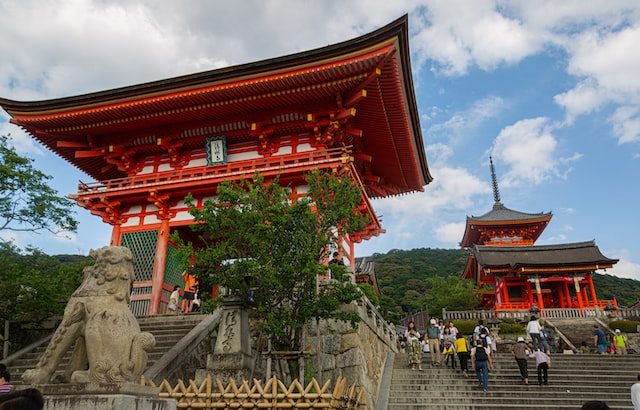 Kyoto, a city in the Kansai region situated on Japan’s Honshu Island, is considered the capital of Japanese culture. Home to over 400 shrines and 1,600 temples, 16 of these have been delegated as UNESCO World Heritage Sites. With so many religious and spiritual spots to choose from, it can be a bit overwhelming to decide which places to head to. If time is not a luxury you can afford, read on as we list down some of the best Buddhist temples in the city.

As one of the major tourist destinations in the country, Kyoto offers a different charm compared to modern Tokyo and vibrant Osaka. Thanks to its status as the country’s previous capital, it enjoys some of the best collection of cultural heritage spots than other places in the country. The fact that it was spared from the air raids in the Second World War has helped immensely in ensuring the survival of these historic sites.

Many people who are seeing Kyoto for the first time often marvel at how well it seemed to have preserved the beauty of old Japan. From its narrow cobblestone streets lined with traditional Japanese architecture to its kimono-clad residents, visitors often relish the wave of nostalgia while strolling around.

As a religious hub, the city is home to around 2000 religious spots— around 1600 of which are Buddhist temples. It doesn’t matter if you do not share the same spiritual belief. There is just something serene and peaceful about these places of worship and nothing beats experiencing that in person. Since it is virtually impossible to check out every single one in one visit alone, we’ve listed down a few of our top picks.

If you’re planning on touring the impressive list of Buddhist temples in Kyoto, the quality-over-quantity approach is the best way to go. Make sure to at least set aside two hours for every temple to truly relish the experience. The more time you can spare, however, the better. That being said, here are our top picks of Buddhist temples you should check out when in Kyoto.

The city’s most popular attraction, thousands of tourists flock to this temple dedicated to the goddess Kannon. One of the delegated World Heritage Sites in Kyoto, it is particularly known for its long history. Kiyomizu-dera is almost often crowded and is certainly the total opposite of the tranquil image you have of Buddhist temples.

This bustling temple, however, is a lot of fun and known for being “hands-on”. As such, it can be a great place to visit with kids. Guests can drink from its sacred spring, ring the giant bell, or even shake a numbered stick to find out what their fortune or omikuji holds.

Also known as the Golden Pavilion, Kinkaku-ji is another tourist favorite, despite the fact that visitors cannot even enter it. Viewed only from across a pond that mirrors its magnificence, its main hall is literally covered in gold.

One of the most iconic sights in Kyoto and even in Japan, expect crowds of visitors visiting the temple no matter the time of year. Beautiful no matter the season, it looks even more breathtaking in the winter when its gold halls contrast the stark whiteness of the snow around it. In the summer, the red leaves surrounding the structure make it look aflame, which makes for some striking photography.

If you want to experience the quintessential Zen temple setting, Daitoku-ji is perfect. With its impeccable Zen garden, it is the perfect setting for meditation. Situated in northern Kyoto, this complex of temples offers the peace and quiet that so many crave.

Fans of karesansui gardens will love it here. Simplicity is heavily emphasized in the overall landscape of the temple complex. Make your way through the picturesque walkway and head over to the moss garden in Koto-in for meditation. If you chance to visit in the spring or fall, you can check out the halls and garden at Obai-in.

One of Kyoto’s largest temples, it is also considered one of the most important sites in Zen Buddhism. Built in the 13th century, it has seen its fair share of renovations and additions over the years. Today, the temple grounds and building showcase a mixture of styles across the numerous eras of imperial Japan.

What’s notable about the temple is how every garden around the temple ground has its own style. Inside you can enjoy the view of the lush greenery, picturesque ponds, and striking rock gardens. The autumn foliage within the temple grounds is especially famous. People flock to the temple to witness the maple leaves turn into wonderful hues of orange and red.

One of the 17 World Heritage Sites in Kyoto, Saiho-ji is a gorgeous Zen Buddhist temple also known by its nickname Koke-dera. Famous for its moss garden, the temple is half hidden and is a known oasis of serenity where time seems to have stood still.

The temple is known for its more than 120 species of moss. People especially love to come here to experience the calm and otherworldly hush of its garden. The perfect spot to wind down when life gets too hectic, it is often known to bring about some profound calmness and peace to anybody who dares to take a bit of pause here. Entering the temple requires booking in advance. In addition, visitors are also expected to take part in the shakyo and kito Buddhist practices when at the site.

If a trip to Arashiyama is part of your Kyoto itinerary, then make sure not to miss a visit to Tenryu-ji. One of the 5 important Zen temples in Japan, it also happens to be the most picturesque. It is most famous for displaying shakkei where the landscaped garden interacts seamlessly with the natural landscape for the best viewing experience.

Arashiyama’s natural forests skillfully blend in as a natural border for the temple garden’s waterways and pond. As such, the setting effectively showcases the different changes that nature goes through with each season. Depending on the time of your visit, you can experience the thick green foliage, the fiery-colored leaves in autumn, or the delicate pink hues of the Sakura in spring. Of course, you wouldn’t want to miss the famous bamboo groves that Arashiyama is known for, right outside the temple.

If stepping away from the humdrum of the city is truly what you’re hoping to experience, then a trip to Kurama-dera is most welcome. Located in the Kitayama woodlands in Kyoto City’s mountain north, Kurama village is home to not just some natural onsen but also the equally famous Kurama-dera.

Situated on the slopes of the mountain, the temple gives off the impression of being part of the actual scenery. Perhaps it is this closeness to nature that gives it that sense of spirituality— something that many of the more popular shrines around do not. Getting to the temple requires a hike from the town. It is a wonderful part of the experience though. It is also a chance to admire the beauty of the nature surrounding the temple and the changes it goes through with the season.

One of the biggest temples in Kyoto, Nazen-ji is also the head of Zen Buddhism’s Rinzai sect. Located in Higashiyama, the temple is most popular for its sprawling grounds, just right outside the city center. Originally built as a place for worship for the country’s prosperity during the Kamakura period, the Cloistered Emperor Kameyama inaugurated it in 1291.

People who come to Nanzen-ji are often captivated by its distinctive Japanese style. The temple grounds feature dozens of sub-temples. These structures are artfully separated by exquisitely landscaped gardens featuring paths, trees, and even streams. A waterfall along the hillside found at the back of the temple houses a hidden grotto. Also a designated National Historic Site, the temple also houses important cultural properties.

Landscaping and garden connoisseurs would love a visit to Shoren-in Temple. Best experienced by walking around, it is also a great place for mediation. Its idyllic ambiance makes for the perfect escape. If you want to escape the usual throng of people crowding Kyoto’s more touristy areas, this is the place.

Compared to many of Kyoto’s famous temples, Shoren-in is relatively smaller. A known Tendai Buddhist place of worship, it is striking for its beautifully landscaped grounds. The complex features meandering brooks, grassy fields, and even bamboo grooves. Shoren-in used to be the place of residence for the Emperor’s son. Eventually, this temple situated right at the bottom of the mountains of Higashiyama was transformed into the temple it is now known today.

The black dragons on Kennin-ji’s ceiling seem to give off the impression that they are alive. However, there is more to the temple than its twin dragons! Located very close to Shiko and Hanamikoji streets, Kennin-ji also features some very remarkable masterpieces of Japanese design and art.

The temple grounds are ideal for walking around, thanks to its expansive area. It also features two karesansui gardens, offering visitors a sense of tranquility. Considered to be Kyoto’s oldest Zen Buddhist temple, the peaceful setting is a great getaway if you want to escape the bustle of the downtown area.

Visiting a Buddhist temple does not usually require following strict protocols and etiquette. That being said, as these are religious places, then being decently dressed is expected. Cut-off shorts and sleeveless shirts are a no-no, although casual clothing is allowed.

Photography is generally allowed in these places. However, some temples may prohibit it in some of their halls. So, it is always advised to pay attention to signs before you start clicking away on your camera. Donation boxes are often positioned in front of the altars and you can always toss a coin if you wish to.

It’s common for people to pray, chant, or meditate in the temple halls. So, always make sure to keep your voice down. When walking around the temple gardens, walkways are always indicated so, stick to where it is allowed.

Visiting a temple also usually requires taking off your shoes when entering the halls. To save yourself from the hassle of taking off and then putting on your shoes again, you might want to consider wearing easy footwear such as slip-ons.

Experience the beauty of the Buddhist faith

The numerous Buddhist temples around Kyoto each exude its own charm and appeal. Some may be thronged with dedicated pilgrims, others may offer more peace, calmness, and quiet. Other temples may give off this mystical, brooding, and lonely ambiance, while others are thronged with crowds of visitors. Regardless, always consider each temple for its own merit. You don’t even need to be religious or spiritual to appreciate their existence. Just the fact that they have been around for hundreds of years is more than enough reason to afford them the respect and reverence they so deserve.