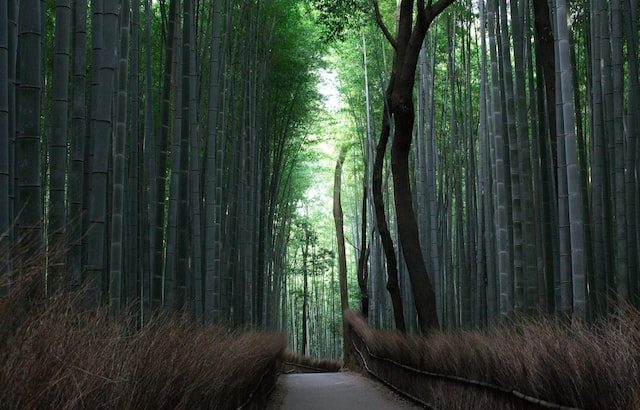 When planning a trip to Kyoto, one place that has probably kept popping out of every travel guide you’ve looked at is the Arashiyama Bamboo Grove. One of the city’s most photographed sights, it’s also one of its most iconic. As easily recognizable as the majestic Kinkaku-ji or the beautiful Kiyomizu-dera, it is one Kyoto attraction you want to experience at least once.

Located just outside the city, it’s a scene that leaps out of every photograph. Tall bamboo shoots lining up serene walkways, slivers of sunshine peeking through a canopy of green leaves— awe-inspiring is an understatement.

A popular site even as far as back as the Heian period, it has always been a popular attraction among wealthy Japanese nobles. Today, the Arashiyama Bamboo Grove is seen by thousands of people every year. The place gets especially crowded during cherry blossom season and in the fall.

Known by a different name

While the bamboo forest is generally referred to as the Arashiyama Bamboo Grove, it is actually called Sagano Bamboo Forest. Because it is situated in Kyoto’s Arashiyama District, the unofficial name associated with its location sort of just stuck.

Arashiyama is situated in the western part of Kyoto. Standing on the slopes of Arashiyama mountain, right across it is the Oi River. The beauty of this picturesque district is even more enhanced by the beautiful mountain as its backdrop. Unsurprisingly, the district has been designated by the Japanese government as one of its national historic sites.

The bamboo grove can be accessed directly from Arashiyama’s main street near Tenryu-ji Temple’s entrance. To access the grove, just walk and follow the main path which should lead you uphill. It’s quite common for people to pair a visit to the temple with seeing the bamboo grove. If you’re up to it, the beautiful gardens of Okochi-Sanso Villa are right at the top of the hill.

A certain type of bamboo

What makes the bamboo forest in Arashiyama particularly popular among tourists is just how breathtakingly beautiful it is— surreal even. There’s something calming about the soothing sounds made by the gentle swaying of the bamboo. It requires a firsthand experience to truly grasp.

The grove mostly consists of a type of bamboo, the Phyllostachys edulis more commonly known as Moso Bamboo. Known as a giant timber type of bamboo, it can reach up to 92 feet or 28 meters in height. The remarkable height of the bamboos certainly adds to the surreal feel of the grove. Interestingly, this bamboo type is not native to the region and has actually originated from Taiwan and China.

It can get crowded

There is no denying that the bamboo forest is indeed a beautiful sight to see. However, people do need to temper their expectations when visiting the grove. For one, many of the pictures that can be seen posted on the internet have been digitally enhanced. While the reality is no less breathtaking, people also need to understand as a popular tourist destination, it can get crowded.

Many of the photographs of the bamboo forest seem to capture its serene, quiet, and calm atmosphere. Unfortunately, with its number of visitors, a quiet, solitary walk on the grove is just not possible. If you’re visiting the grove in the hopes of enjoying a peaceful stroll in solitude, you’ll be sorely disappointed. Unless you come here first thing in the morning before the rest of the crowd, of course.

With thousands upon thousands of tourists visiting every year, the bamboo forest is one of Kyoto’s top tourist attractions. Unfortunately, as is wont with touristy places, it hasn’t remained unscathed from not-so-mindful visitors.

Some tourists have not been particularly mindful of the bamboos in the forest. Perhaps in an effort to leave behind a memento of having been there, some have left carvings on the bamboos. Many often carve their initials on the trunk to mark their visit, most of the names being foreign visitors. This is not only highly disrespectful but can also be damaging to the bamboos. Doing so can tamper their growth, not to mention can mar their appearance.

The bamboos make a special sound

One of the most notable things about the bamboo forest is how the trees are planted. The bamboos were situated close together to help create a dense forest look. Add to that their giant height and you get an almost ethereal feel. With a bit of wind, this grove of giant bamboo starts to sway producing a mesmerizing sound.

Remarkably, the sounds made by the Sagano Bamboos Forest have earned the distinction of being one of Japan’s “100 soundscapes”. Put together by the country’s Ministry of Environment, the list is part of their effort to encourage the Japanese to pay more attention to the sounds produced by nature.

While the bamboo forest is one of the most popular attractions in Kyoto, it is not the only one in the area. Considering how Kyoto is home to around 2000 shrines and temples, it’s hardly surprising that one can be found so close to the grove.

Right across the Katsura River is the famous Tenryu-ji Temple. One of the most prominent temples in Kyoto, it is also the main temple of the Rinzai Buddhism sect. Built around 1339-1345, it is considered a historically and culturally significant temple. To recognize that, it was officially declared one of the World Heritage Sites by UNESCO in 1994. There is a wide belief that the temple was built right next to the bamboo forest for good luck and to ward off the forces of evil.

What makes the bamboo forest so popular among tourists is its beautiful walking trails. With thick vegetation lining up the path along with giant bamboos, gently swaying in the breeze, it can’t get any more picturesque than that. The trail is about 300 meters long and can be accessed from the Arashiyama main street. It is wide enough too to accommodate not just pedestrians but also cyclists and even rickshaws.

Rickshaw rides on these trails can be a lot of fun, not to mention, a great way to reminisce about how things used to be in old Japan. It’s an authentic Japanese experience you should at least try once. You can even rent a yukata to fully embody the experience and this is one of the many ways that you can enjoy a visit to this bamboo forest.

Popular since the olden times

The popularity of the bamboo forest is not just a recent thing. Back in the day, even as far back as the 8th century, it is already a highly popular attraction among tourists and wealthy Japanese nobles. Add to that the scenic views provided by the Katsura River and the densely -forested hills in the area, it makes sense that the district gets recognized as a National Historic Site.

Boat rides in this part of Arashiyama are especially popular among tourists as it is a way to take in the scenic spots. It is even more popular during fall as it gives people the chance to take in the full extent of the beauty of the trees as their leaves change into autumn colors. The same is true during cherry blossom season. Today, boat rides are as popular as ever in this part of Kyoto.

The Arashiyama Bamboo Grove is always open to the public and no ticket is required to see and experience its serene beauty. So, if you ever find yourself in Kyoto and you’ve had your fill of its beautiful gardens or the wonderful old-world charm of Gion, take a trip to Arashiyama and be enchanted by the wonderful sights and sounds of its iconic bamboo forest.