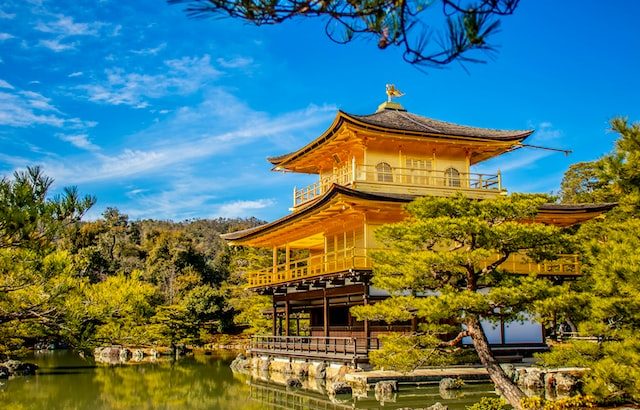 Kyoto is a wonderful place to visit if you want to immerse yourself in Japan’s rich culture and history. Having been spared from the devastating air raids of the Second World War, many of its cultural heritage spots have been preserved to this day. There is plenty to choose from the number of ancient shrines and temples in the city. However, one stands out in magnificence and beauty— the Kinkakuji Temple, also known as the Golden Pavilion.

One of the country’s most honored temples, Kinkakuji Temple is also one of Japan’s most popular. Hundreds of tourists from all over the world flock to the site to get a glimpse of the exquisite beauty of the Zen temple and its equally captivating surroundings. Located in Northern Kyoto, this used to be the retirement manor of the 3rd Ashikaga shogun, Ashikaga Yoshimitsu.

When he passed away in 1408, the Rinzai faction transformed the place into a Zen sanctuary. Throughout its long and colored history, the temple has seen its fair share of devastation, not least of which was when it got burned twice during Kyoto’s infamous Onin War. Today, it is recognized as a World Heritage Site by UNESCO— truly a source of Japanese pride.

The villa used to be known as Kitayama-dai. Back then, it was the property of a powerful Japanese statesman, Saionji Kitsune. In 1397, however, the family sold it to Ashikaga Yoshimitsu, the ruling Ashikaga shogun at the time. He eventually transformed the villa into a complex and renamed it Kinkakuji. Upon his passing and in accordance with his wishes, the complex was transformed into the Zen temple it is now known today.

The temple is one of Japan’s most popular historic sites. Every year, thousands of people come to visit Kinkakuji, despite the fact that it can only be viewed from across the pond. Designated as a national Special Historic Site, it is also recognized as a Special Landscape and one of the 17 spots that make up Ancient Kyoto’s Historic Monuments.

The structure’s construction dates back to the 14th century. Back then, it was used as a retirement villa of Ashikaga’s top military commander at the time, Ashikaga Yoshimitsu. He was a renowned patron of the arts. His death in 1408 led to the conversion of the pavilion into the Zen temple it is now known. The pavilion eventually got named Kinkakuji despite already having an official name.

Struck by fire more than once

What’s striking about the temple is the impression of both water and fire from its exterior. Interestingly, the structure has been burned a few times in the past. It was first set ablaze during the 1467-77 Onin War. The fire caused the buildings within to burn down to ashes, However, the pavilion was spared.

On July 2, 1950, the temple was set ablaze again when a novice monk attempted to take his life in the pavilion’s golden flames. Hayaki Yoshen was a distraught monk who got arrested before he can take his life. A seven-year sentence was handed out but due to several health issues, he was released later on.

Ashikaga Yoshimitsu’s original statue inside the temple was burned down because of the fire. Later on, it was restored when the golden pavilion underwent some much-needed reconstruction and renovations.

The structure of the current Kinkakuji temple is the result of the rebuilding efforts carried out in 1955. The three floors of the temple have their own unique architectural style. The Shinden, Bukke, and Chinese Zen Hall styles were used in building the first, second, and third floors respectively.

Meanwhile, the temple’s golden pavilion serves as a shariden. As such, it houses Buddha’s relics.

In 1987, temple renovations saw the structure being re-covered with golden leaves that are five times thicker than the original! Restoration efforts were also extended to the interiors of the building. This includes paintings along with Yoshimitsu’s original statue. The roof was also restored in 2003.

At three stories, the pavilion rises at approximately 41 feet or 12.5 meters high.

The first floor, also referred to as the Hou-sui-in or The Camber of the Dharma Waters is built in the shinden-zukuri style. This is very much reminiscent of the residential style of imperial aristocracy in the 11th century. The design features an open space that effortlessly leads to adjacent verandas. The design also utilizes white plaster and unpainted, natural wood. During the days of Yoshimitsu, this floor was used as a reception hall where guests are welcomed.

Kinkakuji’s second floor, the Chou-on-dou or the Tower of the Sound Waves, is built with the bukke-zukuri style. This is very reminiscent of the style of samurai houses. This part of the structure is known for evoking impermanence hence the use of latticed windows and sliding wood doors.

A Buddha Hall is also housed in this part of the structure. In addition, it also features a shrine of Kannon, the goddess of mercy. During Yoshimitsu’s time, the second floor was used as a setting for private meetings with the shogun’s honored guests.

The third floor is known as Kukkyo-chou, also referred to as the Cupola of the Ultimate. Built in the zen-style architecture, it is notable for its rounded windows. It is also more ornamented compared to the other two floors. It is used to shelter 25 Bodhisattvas and an Amida triad.

With an area of 23 square feet or 2 square meters, it is an intimate setting where tea ceremonies and close meetings with friends used to be conducted. On the pavilion’s roof is a tall bronze statue of a phoenix. At approximately 3.7 meters in height, it is also coated in gold leaves.

Elegant view across the pond

Victors to the Kinkakuji are only allowed to view the structure from across the pond. Even now, guests are forbidden to enter its halls. Still, this has not dampened the enthusiasm of the thousands of visitors that come to the place regularly. The view, after all, is more than worth the trip— even when it can only be enjoyed from afar.

When visiting Kinkakuji, visitors can pass by the former living quarters of the head priests. The path passes by the pavilion from behind which then leads to the temple gardens. The garden’s original design from its inception during Yoshimitsu’s time has been retained.

There are a few interesting spots here including the pond that never dries up or the Anmintaku Pond. There are also statues in the garden where people can toss coins into for luck. The Sekkatei Tea House is also another notable spot on the temple ground. It was a later addition to the complex, built around the Edo Period.

The Kinkakuji also extended over to the Kyoko-chi pond, which reflects the structure of its still water. It is designed with 10 smaller islands, which rock composition reflects the Zen typology. The arrangements of the plants and bridges surrounding the pond are done in a manner that reflects famous places in Japanese and Chinese literature.

The pond’s largest islet in the pond is a representation of Japan’s islands. In addition, the four stones that form a line in the pond are meant to represent sailboats. A fishing deck is also set up right beside the pavilion.

Regardless of the time of the year, Kinkakuji is always worth a visit. However, if you really want to bask in its full beauty and glory, there are specific times of the year that will allow you to make the most of that.

For instance, some people prefer to come here in autumn. During this time, the leaves of the trees surrounding the pond turn red which transforms the reflection in the water, making it look as if it is ablaze. This leads to the Kinkakuji looking as if it’s engulfed in flames.

The winter season is also another great time of the year to visit Kinkakuji. Thanks to the pine trees surrounding the structure, it makes for a wonderful contrast to the wonderful golden color of the pavilion, making it look even more electric. This is even more heightened in its reflection in the calm, still waters of the pond.

A view you won’t want to miss

Regardless of the time of the year, however, the Kinkakuji Temple is always worth a visit. Even when you’ve seen it several times before, the breathtaking view is always sure to keep you wanting to go back. Once you’ve had your fill of the modern chaos that is Tokyo and you’re done with a sumptuous food crawl in vibrant Osaka, make Kyoto and the breathtaking Kinkakuji Temple your next stop the next time you plan a trip to Japan!