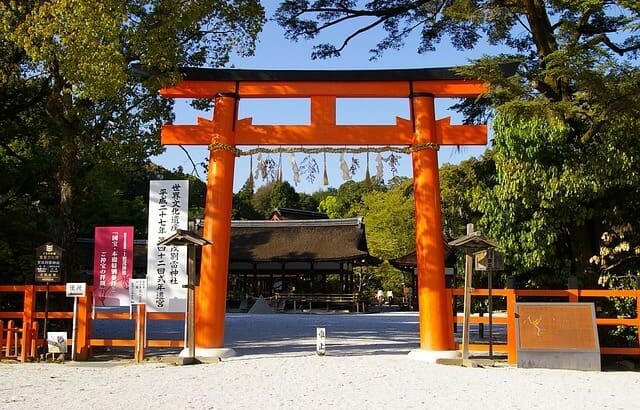 Kamigamo Shrine is one of the country’s oldest shrines. With spiritual practices going as far back as the 6th century the shrine has already been around even long before Kyoto became Japan’s capital. Revered by those residing along the Kamo River, the shrine is dedicated to the god descended from Mt Kouyama.

People around the area have long since worshipped the sacred Mt Kouyama even as far back as the mythological ages. According to remaining written records, construction of the shrine building may have been done in 678. This is way before Kyoto was established as the capital in 794.

Along with Shimogamo Shrine, Kamigamo Jinja is part of the Kamo Shrines— two of Kyoto’s oldest and most important shrines. Such is their importance to the Japanese culture and the historical roots and spiritual roots of the city and even the country that they are recognized as World Heritage Sites by UNESCO. Situated in the north of the city, they are meant to protect and ward off evil.

Famous for the two sand cones known as tatesuna, it is located 3.5 kilometers upstream of the Kamo River. The creation of the tatesuna or sand cones has been practiced since ancient times. It is believed that they clean and purify the sanctuary. The two Kamo shrines also host one of the biggest festivals in Kyoto every 15th of May, known as Aoi Matsuri.

As one of the oldest shrines of the Shinto faith, the Kamigamo Shrine predates Kyoto’s establishment as the country’s capital. Historical texts reflect the first time the shrine was ever mentioned was in 678. In the text, it was referred to by its formal name, Kamo-wakeikazuchi Jinja. This further proves that its presence and the spiritual practices associated with it have long been practiced in the area.

The deity Kamo Wakeikazuzhi no Kami is enshrined here. He is said to be the offspring of the union between Tamayori-hime no Mikoto and a deity she encountered during an ablution. She was the daughter of Kamo Taketsunumi, the founder of the Kamo clan. Both father and daughter are now enshrined in the Shimogamo Shrine, the other half of the Kamo shrines.

According to the legend, Tamayori-hime was purifying herself in the river. It was then she spotted an arrow heading downstream. Curious, she picked it up and placed it on the riverbank. To her surprise, the arrow transformed into its true form which turned out to be a deity. They got married and from that union, they had a son. They named him Wakeikazuchi and is known for being a deity that controls natural forces.

Upon Kyoto’s establishment as the country’s capital in 794, the Kamigamo shrine benefited from imperial patronage. The emperor at the time recognized the crucial role the Kamo shrines play in preventing evil influences from reaching Kyoto. As a result, the shrine flourished considerably.

Kamigamo shrine is not shy of imperial visits as it was visited in 794 by Emperor Kamu, in 942 by Emperor Suzaku, and in 979 by Emperor Enyu. Emperors also made sure that the shrine’s deities are made aware of any edicts that the emperor commands. This led to the shrine being delegated as an ichinomiya— one of the 22 chief shrines of the Shinto faith. As a government-supported shrine, it also earned the delegation of kanpei-taisha.

What’s striking about the shrine is the wide space spanning the first and second torii gates. The open space is measured at around 160 meters peppered with white sands that immaculately cut through a lush field of green.

Once you reach the shrine grounds’ inner precincts, you’ll notice a distinct change in the scenery. The rest of the shrine buildings are cradled by a deep forest, replete with a stream running in between. In front of one of the buildings known as Hosodono are the two tatesuna. These conical sand mounds are supposed to be representations of the scared Mt Kouyama. If you pay close attention to the sand mounds, you’ll notice pine needles on top of them. It is believed that they serve as an antenna that catches the shrine god’s powers.

Beyond the stream is the shrine’s main building. There is also the renowned “Romon Gate” which is very easy to spot with its bright and pretty vermillion colors. Most people that take photos of this shrine tend to feature this eye-catching structure. Within the gate is the main building known as Honden, and another one known as Gonden.

The origins of “kamo”

Japan has always been closely associated with rice. As one of its staple foods, it is no surprise that there is great interest in the focus of growing and producing the crop. Back in the day, people who carry the name “kamo” were closely associated with using advanced farming techniques in growing and producing rice. They originated from Nara and eventually settle in Kyoto in search of a better, more fertile ground with which their rice farming can flourish.

Tower gates or Romon gates are structures that are used to mark the entrances of various places of importance in Japan. They are very easy to spot, thanks to their imposing size as well as their typically red colors.

Kamigamo Shrine is no exception. There is a small bridge over a stream that visitors will need to cross first to reach the Romon Gate. It is positioned right at the entrance of the main buildings— Honden and Gonden. While somewhat similar to torii gates, Romon gates are different due to how they are only supposed to mark important locations in Japan. As such, there are only a few places across the country that are marked by these vermillion-colored structures.

The shrine’s main building, reconstructed back in 1863, is known as Honden. Gonden, on the other hand, is a replica of Honden. The reason for replicating Honden is to ensure that there will be a backup for the shrine deity to dwell if the main building gets damaged. Both of these buildings within the shrine are classified as National Treasures. Every year, as Kyoto celebrates the Aoi Matsuri festival on May 15th, the celebrations are carried out in the Honden.

Notable for their conical shape, twin sand mounds can be found in front of one of the main buildings of Kamigamo Shrine. The shape is said to represent the shape of the sacred Mt Kouyama. It is believed that the deity enshrined in the Kamigamo Jinja descended from this sacred mountain.

Interestingly, the shrine’s tatesuna-inspired practices are still observed to this day. For instance, in new construction sites, it is common to form two conical sand mounds and then scatter them afterward, as a way of keeping evil away.

One of Kyoto’s most important symbols is the Kamogawa River. For hundreds of years that the Kamigamo shrine has been around, it has always shared a close connection with the Kamogawa River. This is because the body of water has served as a means for purification.

Thanks to the constant flow of the water in the river, it is believed to clean everything that it touches. According to the Shinto belief, the river has the power to not only remove pain and heal the heart but also has a way to take away sadness. This is why it is no surprise that people consider Kamigamo Shrine a revered healing spot. Many of those that visit the shrine are not only interested in seeing and experiencing its long history up close but also experiencing its healing power.

History and spirituality rolled into one

People that come to Kyoto are often amazed at the deep-rooted history of the numerous cultural heritage spots in the city. From the breathtakingly beautiful Kinkakuji Temple to the historic Kamigamo Shrine, it is even more astounding how well-preserved these structures are despite having been around for hundreds of years. So, the next time you visit Japan, go beyond the confines of Tokyo and experience Kyoto for all its old-world charm and beauty. You might just keep coming back for more!