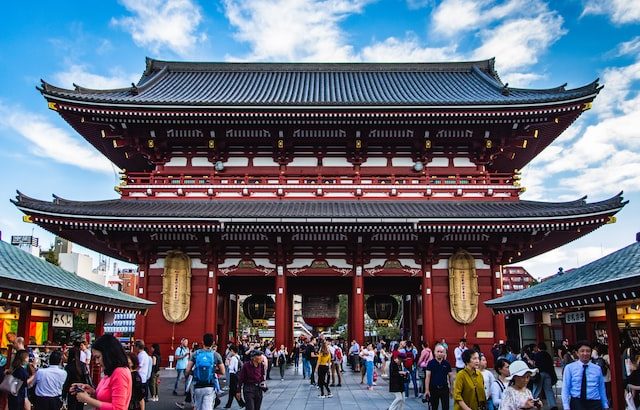 Tokyo is one dynamic city where old and new Japan seem to have seamlessly merged. Despite the impressive skyscrapers jutting out its skyline and the flashy neon lights of its numerous shopping districts, in between all the modernity are remnants of the country’s traditional past. There is no shortage of impressive city views in the Japanese capital. From more modern structures to centuries-old temples, there’s something for everyone here. Interestingly, one of its most notable architectures is also one of its oldest— the ancient Senso-ji Temple.

Situated in Asakusa in Tokyo, Senso-ji is one of the many shrines and temples in and around the capital. This ancient Buddhist temple is considered to be the oldest in the city and unsurprisingly, is also one of its most important.

Senso-ji used to be associated with the Tendai Buddhism sect. After World War II, however, it became independent. Records show that it was constructed back in 645 AD. Aside from being an important religious symbol, its structure is also one of the best examples of Japanese architecture. Testament to its popularity are the millions of tourists that visit it every year.

It is dedicated to the goddess Kannon

Senso-ji pays homage to Kannon, the goddess of mercy. According to local legends, the goddess’ statue was found by two brothers who went out fishing in the Sumida River in 628 AD. They tried throwing it back into the river but to no avail. No matter what they do, it keeps resurfacing.

Whenever someone takes the statue away or misfortune befell it, it just seems to have a way of finding its way back to the river. Eventually, they decided to take the statue with them and went on to build the temple dedicated to the goddess. The temple was completed in 645 AD.

Aside from paying homage to Kannon, the temple also serves as a monument to celebrate the many miraculous events surrounding the founding of the goddess’ statue. Today, Senso-ji serves as one of the most popular temples in Tokyo with millions of people visiting it every year.

It’s located near the historical center of Tokyo

Senso-ji is situated near Tokyo’s center. Located in the Taito neighborhood in the Asakusa district, it’s close to the city’s historical center. The street leading to the temple is known as Nakamise-Dori and has been around since the 18th century. Over its long history, shops have always occupied the area. However, an earthquake in 1924 destroyed most of the original ones.

One of Tokyo’s biggest and most famous festivals— Sanja Matsuri, is held on Senso-ji’s grounds. Taking place in the late spring, the festival 3-4 days of celebrations which often leads most of the streets in the surrounding area to be closed from traffic from dawn until the evening.

Happening every May, Sanja Festival is held to honor the three men who were credited with the founding of the temple namely: Hajino Nakatomo, Hinokuma Takenari, and Hinokuma Hamanari. During the event, the temple becomes the focal point of the celebrations where large crowds gather not only inside the temple complex but also spilling over the streets outside. If you’re lucky enough to plan a trip to Japan when the festival is taking place, it is one spectacle don’t want to miss.

While the main temple building is nothing short of magnificent, the overall beauty of Senso-ji is cemented by the equally intricately designed buildings within the complex. Several side buildings and gates grace the temple grounds and each has a fascinating and long history behind it.

Nitenmon, the temple’s oldest gate, was built in 1618. Situated on the right part of the main building it’s a great spot for getting a good view of the pagoda and the main temple. Kaminari-mon, also known as the Thunder Gate is easily recognizable with the massive red paper lantern adorning its middle beam. On the lantern are special characters unique to this temple and even in all of Japan.

Construction of the original site of the temple was completed in 645 AD. This makes Senso-ji Tokyo’s oldest temple. Due to the significant role it plays in the capital’s history, it is also considered its most important temple.

For most of its history, the temple has been closely associated with Tendai Buddhism. The sect was established in the country in 806 AD. These days, however, the temple is known for its independent status. Another interesting fact about the temple is that it is considered the most-visited spiritual site not only in Japan but also in the world! Every year, it welcomes a whopping 30 million visitors!

It enshrines other deities

While Kannon Bodhisattva serves as the temple’s main deity, other deities are also worshipped here. For instance, there is the Pindola or Nadebotoke statue which is believed to heal hurting body parts. People believe that if you’re hurting anywhere in your body, all you need to do is touch the statue and then touch whichever part of your body that hurts and the deity will help in the healing process.

Another deity enshrined and worshipped here is Kuzuryu Gongen. It is believed that he can control rain. Interestingly, the temple grounds also play host to some interesting and unique statues. Statues of yokai or monsters found in Japanese folklore, including Konaki Jijii, Madama no Oyaji, and Kitaro can be found here. All three appear in “Gegege no Kitaro” a Japanese manga. Along with an Ultraman statue, the four characters can be seen lining up along the road connecting Kototoi Dori and the temple’s main hall.

A symbol of rebirth

Just like many historical structures in Tokyo, Senso-ji saw destruction during the Second World War. In fact, due to the intense air raids in Tokyo, the temple was completely ruined. March 9 and 10, 1945 marked the date of the temple’s destruction.

Due to its historical, religious, and cultural significance efforts to rebuild it soon went underway. The Japanese consider the restoration of the temple as a symbol of peace and rebirth. Nothing emphasizes this better than the tree inside the courtyard which got hit in the 1945 bombings. Whether it was a miracle or by sheer tenacity, it managed to regrow within the old tree.

A taste of culture

There’s a shopping area close to Senso-ji that has been around for centuries. The shops and vendors here play a prominent role in reserving the cultural significance of the temple. Known for selling items that represent the Japanese culture, here, visitors can buy everything from antiques, and souvenirs to popular traditional Japanese snacks.

It’s become customary for visitors to drop by these shops after visiting the temple. Some of the shops here offer a selection of some of the most popular Japanese street food as well. In addition, the area also has restaurants which make for a perfect stop for hungry tourists looking for scrumptious options to fill their stomachs.

Toss a coin and say a prayer

When visiting the temple, visitors will notice a large box which people throw coins into. This is a popular practice in the simple and you can do the same thing when visiting. There’s no standard amount required although it is quite common to use a 5-yen coin as this is considered to be a symbol of luck by the Japanese.

All you have to do is toss the money into the box. Afterward, bow your head and make two claps. Then say a short prayer. It is a common belief that tossing a coin to the box means tossing away any impurities within you. These impurities may be causing distress in your life. Once the money is tossed, it is believed that the coin absorbs these miseries, thereby, setting you free of them.

Not just an ordinary temple

As Tokyo’s oldest and most important temple, Senso-ji plays a significant role in the city’s historical, cultural, and religious scene. It’s hardly a surprise that its popularity does not only extend to the locals, but to tourists from all over the world as well. So, the next time you’re in Tokyo, stop by Senso-ji Temple and see for yourself what makes it special.