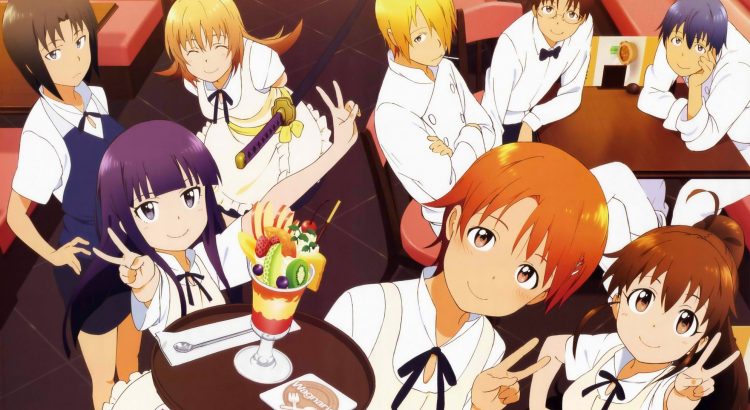 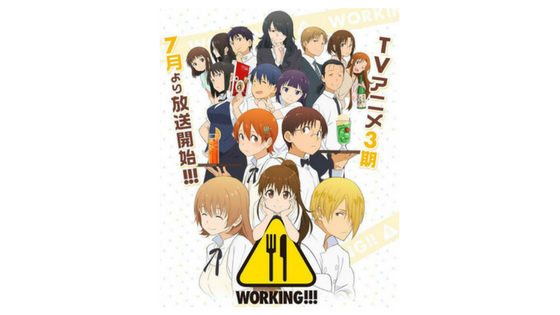 The story is mainly about a restaurant called Wagnaria in which different types of characters (listed below) are related in the sense of work & friendship. The series is exciting & funny for it brings a different vibe of friendship as they work altogether. 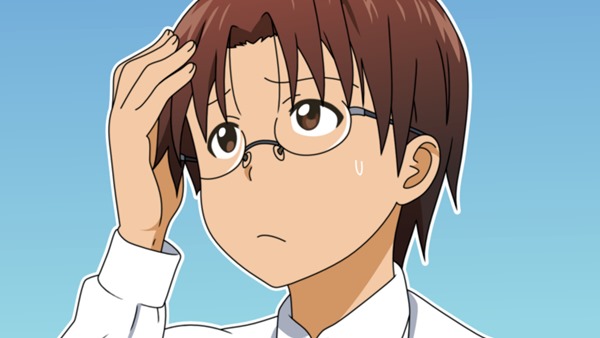 Souta Takanashi (小鳥遊 宗太 Takanashi Sōta) is a 16-year-old high school student who works at Wagnaria Restaurant as a newly recruited waiter at the start of the series. He serves as one of the main protagonists in Working!!. His cross-dressing persona is called Kotori (小鳥). 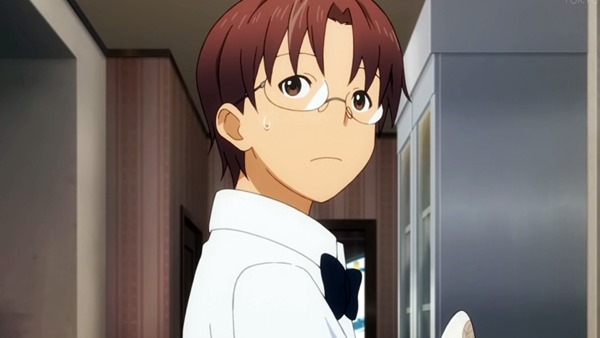 Takanashi has an absolute obsession with cute little things, which is his original reason for working at the restaurant, as Taneshima had recruited him. This obsession started from his siblings due to all being older than him (except Nazuna and being taxing they being taxing to him (hitting him, embarrassing him, unable to do anything without him) that causes him to hate older people. As such, he considers any woman and child over 12 a hag or ugly, and dislikes them, but shows love and compassion to young children and small cute things. This often gets people to think he is a lolicon. For Takanashi, it relatively gives him relief from stress whenever he is in eccentric situations with his coworkers in Wagnaria. 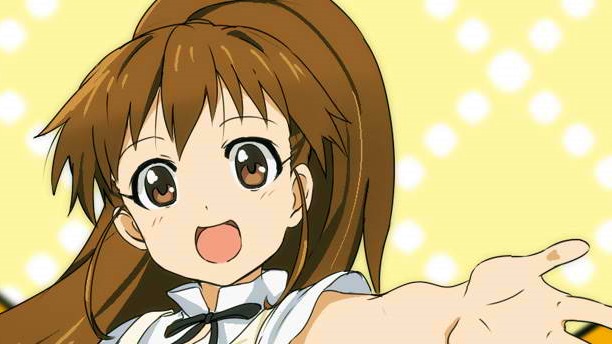 Popura “Poplar” Taneshima is a petite, 17-year-old, high school student who works at Wagnaria as a waitress. She is one of the main female characters in the story, Working!! She has a bubbly personality but is constantly frustrated when people think she’s in middle or elementary school. She always wants everyone to get along. 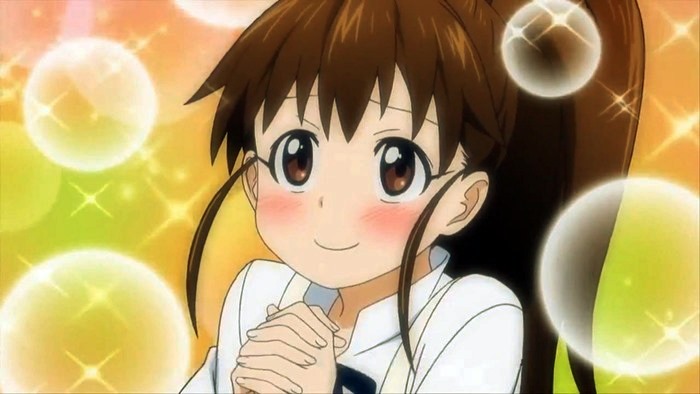 She’s also somewhat oblivious, completely unaware of Satou’s feelings for Yachiyo, and why he messes with her hair. However, she manages to recognize Yachiyo’s feelings for Satou, even before Yachiyo does. She is really worried about her height and measures herself almost every day, though as of the series finale she has finally grown taller. 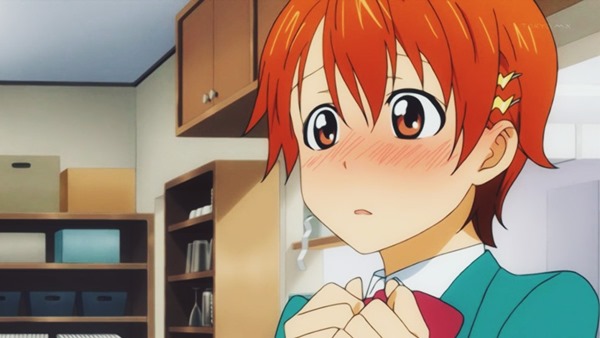 Mahiru Inami is an androphobic, 17-year-old high school student who works at Wagnaria as a waitress. She is one of the main female characters in the story, Working!! 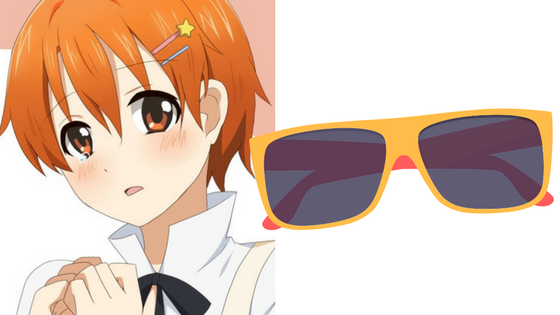 Inami suffers from severe androphobia, which was built up by her father during her childhood, with him making every villain she encountered (books, movies) male, and telling her boys were wolves. He also put weights in her belongings to build up her strength. She is now devastatingly trigger-happy around men, often punching immediately and with massive strength. She is strong enough to cause structural damage to the buildings she touches. Despite her androphobia, she is aware that men are not necessarily to be feared and often struggles with her impulse to punch men she encounters. 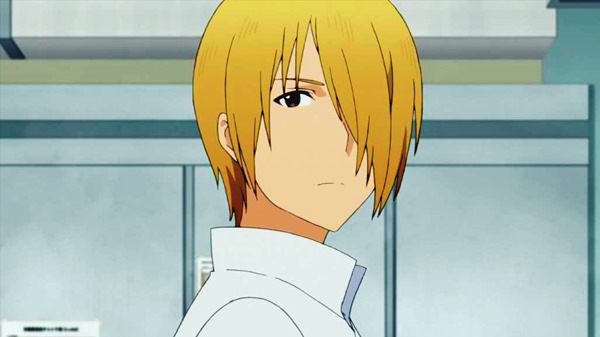 Jun Satou is a serious, straight-to-the-point, 20-year-old man who works at Wagnaria Restaurant as the Head-Chef, and he’s also a college student. He is one of the main male characters in the story, Working!! Satou, along with Souma, is one of the chefs working at Wagnaria. However, since Souma never does any work, Satou is basically the lone chef that does all the work, though he never complains. He goes along with his cooking like nothing is wrong, and almost always doesn’t say a word to anyone. 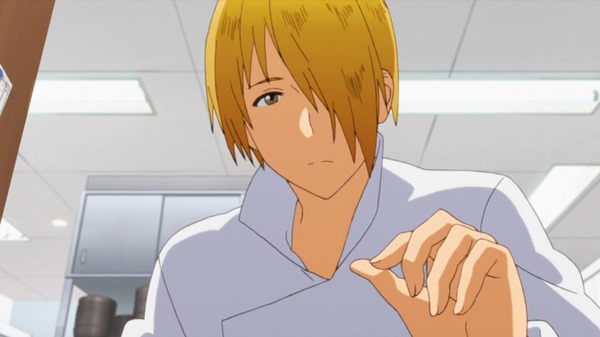 Although Satou is silent most of the time, he does talk occasionally to be the voice of reason. He will often tell the staff to stop goofing around and get to work, or he will tell Yachiyo to stop wasting the food supply by making parfaits for Kyouko. Satou appears to be the most hard-working out of all the employees. In many scenes at the restaurant, he is seen working in the kitchen in the background. 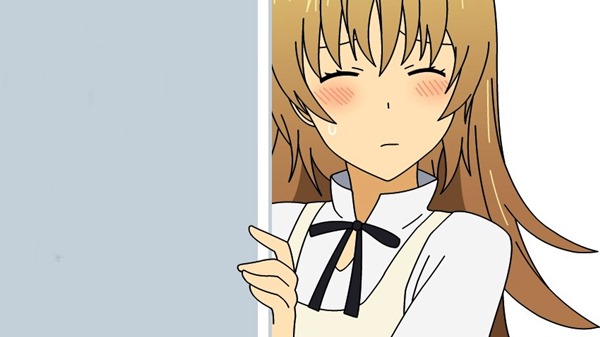 Yachiyo Todoroki is a 20-year-old woman who works at the Wagnaria Restaurant as the floor chief and second-in-command. She is one of the main female characters of the story, Working!! Yachiyo is kind and gentle; she happily helps out anyone who asks and anyone who needs help. It is shown that she is a motherly figure for everyone since she is the chief of staff at Wagnaria. 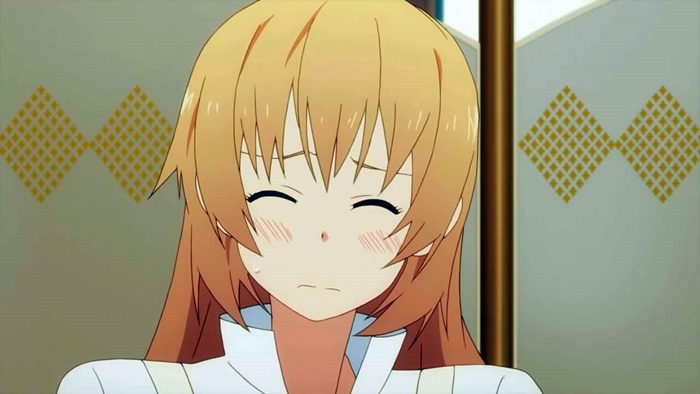 She is also a kind and caring chief, who has loved Kyouko since childhood and is often seen making a parfait for her. She seems to be aggressive sometimes, as seen when Otoo gave the manager some sweets and Yachiyo points her katana at him wanting to ‘kill’ Otoo. She is also quite naive, most especially with Satou’s feelings for her. 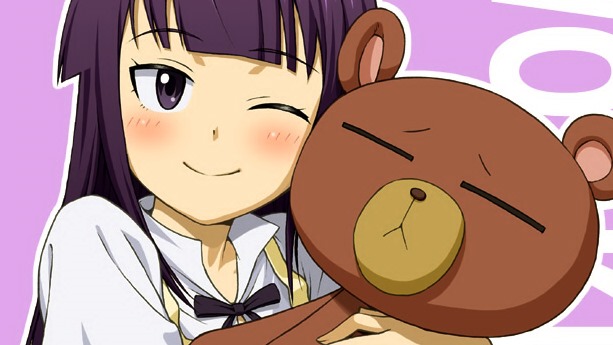 Aoi Yamada is a mysterious self-proclaimed 16-year-old girl, good at disguising, who works at Wagnaria Restaurant as a waitress. She is one of the main female characters of the story, Working!! She is the younger sister of Kirio Yamada, and the daughter of Kikuno. Yamada is kind of short tempered. Yamada is very blunt and messes up the status quo of the restaurant. Also, her arrival made Wagnaria unbalanced. 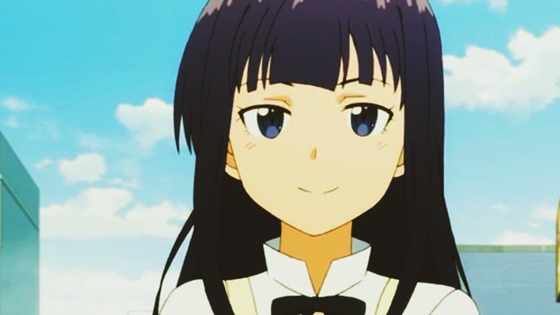 Immediately upon realizing Satou’s crush on Yachiyo, Yamada bluntly told Yachiyo that she was the one that Satou loved. This threw Yachiyo into turmoil and made her depressed and uneasy. Souma and Takanashi then had to explain to Yamada that she shouldn’t always say what she thinks. This bluntness comes with no manners because it was revealed that Yamada does not know right from wrong. She will do things such as call her co-workers at two in the morning to talk or insult someone when she doesn’t like them. 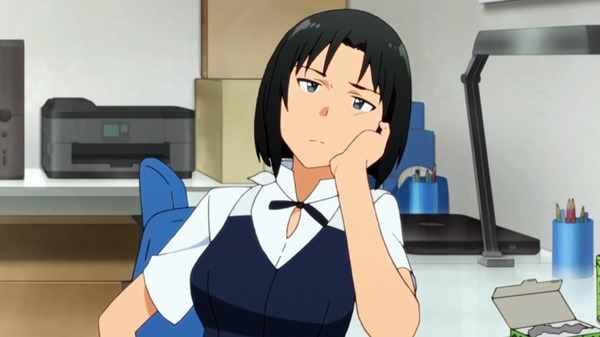 Kyouko Shirafuji is a big appetite, 28-year-old woman who works at Wagnaria Restaurant as a manager. She is one of the main female characters in the story, Working!! She hates being called ‘Old Hag’ or anything an old lady resembles, lazy and short-tempered. She is also a very big glutton and constantly needs to eat food, such as parfaits made by Yachiyo. 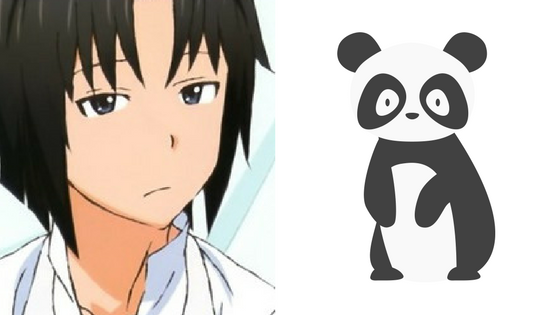 Kyouko was put as first-in-command at Wagnaria after Otoo-san left to go look for his lost wife. It is unknown why he chose her to be in charge since Kyouko does the least amount of work and is always eating the restaurant’s food supply. However, since Kyouko is the oldest, she would be the most fitting to be the manager, which is probably why Otoo-san put her in that position. 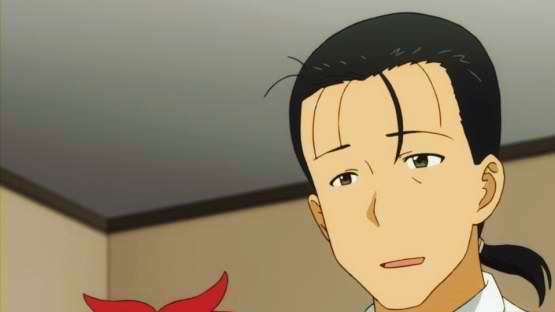 Hyougo Otoo is a kind middle-aged man, he is very patient and has difficulty expressing anger as seen with his interactions with Aoi Yamada who kept insisting him to take her in as an adopted daughter. He is a very faithful, and devoted husband as he travels all of Japan to search for his missing wife Haruna Otoo, who has an incredibly bad sense of directions (to the point that she was once in a sewer line, and even escaped a room that was sealed down with only one exit which was guarded by two employers). 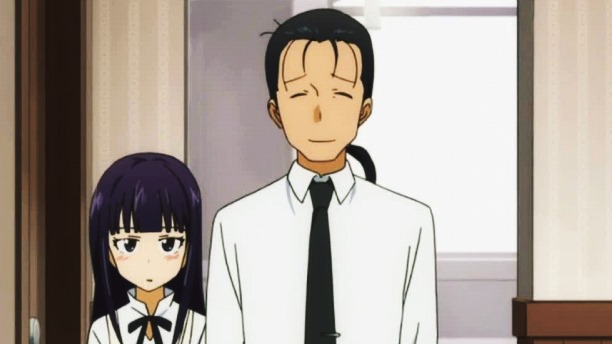 He is the top manager at the family restaurant Wagnaria, however, despite his position, he leaves all the work to his manager Kyouko Shirafuji and invests all his time into searching for his wife. He is seen in only a couple episodes of Working!! 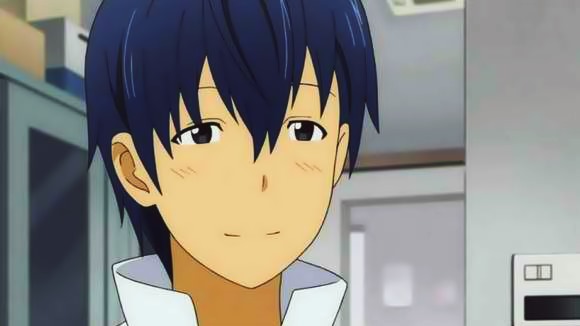 Hiroomi Souma is a 20-year-old man who works in the Wagnaria restaurant as an assistant chef. He is one of the main male characters in the story, Working!!. 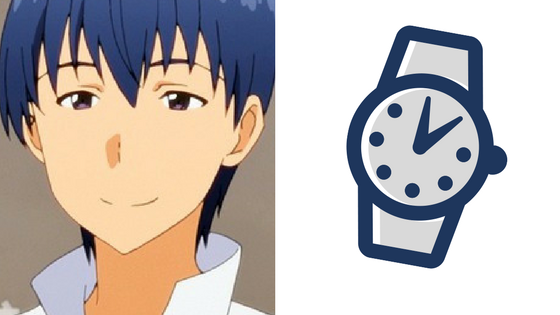 Though he seems kind and polite, he is often labeled a sadist by his co-workers. He is a self- proclaimed genius and actually seems very knowledgeable. He often uses everyone’s embarrassing secrets against them to get them to do his work, or he suddenly spies anyone to know secrets, in order for him to make a “scene”. Another reason Souma likes to find out secrets is that he thinks it’s very exciting to reveal them. 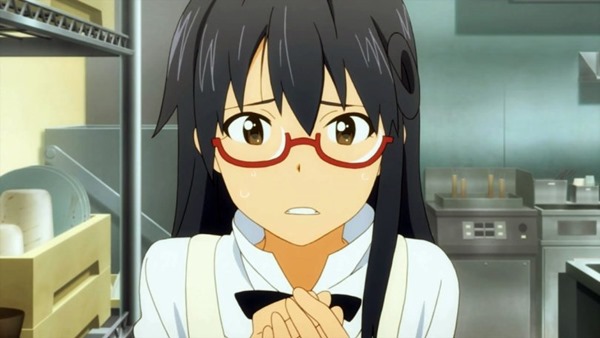 Maya Matsumoto is a “perfectly normal”, 18-year-old woman who works at Wagnaria Restaurant as a waitress. She made some cameo appearances throughout Season 1 and was formally introduced in episode 13. She is a supporting character in the story, Working!!  Maya is a waitress at Wagnaria. A waitress with a huge obsession with the idea of “being normal”. She tries her best to be “ordinary” but is unaware that this radical pursuit of hers makes her more “abnormal” than “normal”. 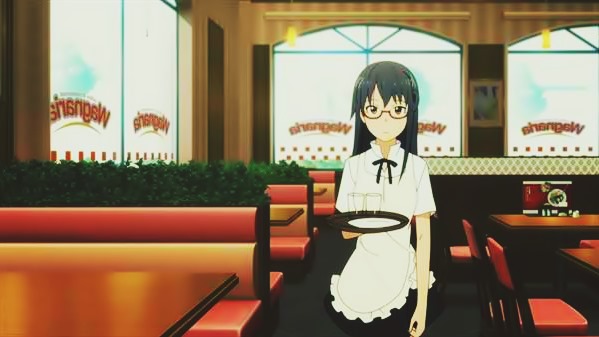 She has a hard time understanding the employees seeing how awkward all of them are and tried not to be familiar with them. She has a very timid personality and respects authority. Maya has long black hair with a curl in the front, she also wears red glasses. In the manga, the author said that her glasses were a bit thicker than Souta Takanashi’s.

Now you know how these characters play in this series. So, if you’re looking for a unique workplace comedy-type of anime, then this series is a must-watch. Don’t forget to share below your opinions & feelings about this show! Have fun~!