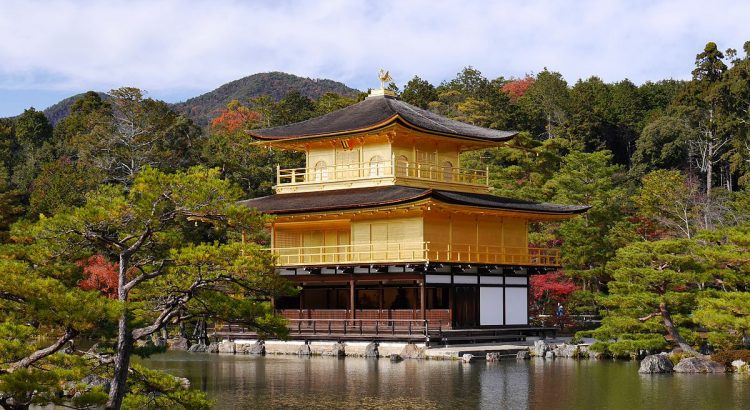 Most of the visitors from around the world loves to witness and experience true peace and begin to conquer places they have never step their feet on. One of those places that offer the mesmerizing beauty and genuine relaxation is gazing the landscape of Kinkaku-ji, a temple in Kyoto, Japan.

Kinkaku-ji (The Temple of the Gold Pavilion) was recognized by UNESCO as a World Cultural Heritage and is classified as one of the historical buildings most representative of Japan. This temple was built in the 14th century and was originally designed as the villa for Ashikaga Yoshimitsu, who was the shogun or a commander-in-chief that time. But when the said shogun died, the place was turned into a Zen Buddhist Temple practicing zazen or the religious meditation in Buddhist training.

The temple has been burnt down many times during wars and recently by arson. It was repaired in 1955 replacing the gold leafs as an improvement in 1987.

Visitors love to visit this place because the garden around the temple gives a stunning view while walking around the large pond. Stones of many styles and sizes can also be seen which adds the beauty of the garden. Aside from that, the gold pavilion’s reflection on water also gives a striking overall view of the landscape.

How to get to Kinkakuji in Kyoto.

You will start your journey at JR Kyoto Station, which is pretty much the central hub for train trips around Kyoto. Get on the Karasuma Line and take it approximately 15 minutes to Kita-Oji Station, and then walk to the bus terminal (about 2 minutes away). At the Kita-Oji Bus Terminal you can take one of several different bus lines (101, 102, 204, and 205) that will stop at the Kinkakuji-michi (Kinkakuji road) in about ten minutes.

Don’t bother any other methods of trying to get to the template unless you are great at navigating yourself. However, the other easiest way to get there is by Taxi of course. A Taxi will likely cost between $10 and $30 depending on where in Kyoto you start, and how bad traffic is. Taxis are more expensive when streets are too busy for them to drive quickly.

The gold color of the temple looks like fire blazing over the open water, leaving a dazzling impression. However the temple itself has literally been on fire several times during wars and as a result of arson.

A monk, distraught with life, attempted suicide among golden flames in 1950. Before that, the temple caught fire during the ten-year-long Onin War (1467-1477). However the temple has a phoenix perched at its peak and is therefore no stranger to fire and then rebirth, and has been rebuilt each time. It has also been restored and improved since, with regular maintenance and repair to its gold leaf.

Some people think of it as a phoenix temple, because of the gorgeous flying phoenix perched on top of the roof.

If you know anything about the mythology of the phoenix, you would know that these birds live forever and are reborn on a cyclical cycle. The phoenix is associated with, and possibly given power by, the sun. Each new phoenix obtains its new life by arising from the ashes of its former self. New phoenixes are not considered children of the former bird, because they are considered to have the same personality or memory.

So much like a phoenix, when the temple was burned down and rebuilt, it is considered the same temple. In fact many of the shrines and temples and places to visit in Japan have been touched by fire at some point and then restored afterwards. A lot of ancient Japan was built out of wood as wood was cheap and abundant, but newer structures are frequently built from concrete instead, which is itself fireproof.