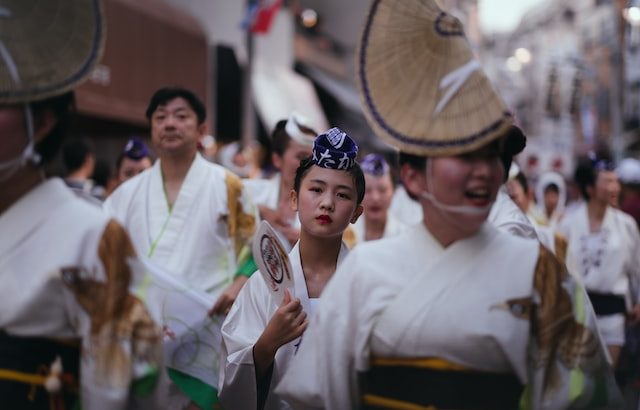 Kanda Matsuri is one of the largest festivals in Japan. Happening in May on the weekend closest to the 15th, this is one festival you’d want to experience if you ever find yourself in Tokyo around this time of the year. If a real Japanese cultural experience is what you’re most looking forward to, this festival will not disappoint.

What is Kanda Matsuri?

One of the many major events in the country, Kanda Matsuri is among Tokyo’s most popular Shinto celebrations along with Fukugawa Matsuri and Sanno Matsuri. Taking place in May, the event usually lasts for an entire week. The festival alternates with Sanno Matsuri and is often held during odd-numbered years.

Hosted by Tokyo’s Kanda Myojin Shrine, it is known to celebrate both good fortune and prosperity. The festival’s procession starts and ends in Chiyoda Ward’s Kanda Myojin Shrine. Among the neighborhoods that are part of the event’s course include Marunouchi, Nihonbashi, and Akihabara.

Part of the festival is the huge parade where volunteers carry mikoshi shrines on their shoulders as they make their way to the Kanda Myojin Shrine. Energetic and happy, the festival has attendees wearing traditional Japanese attire. Part of the event are the Shinto priests on horseback which is very reminiscent of old Japan.

The Kanda Myojin Shrine was founded in 730. Enshrined here are two of the 7 Lucky Gods. The shrine is also dedicated to Taira no Masakado. He was a rebellious feudal lord in the 10th century who, upon his death, was deified.

The importance of the shrine significantly grew due to Tokugawa Ieyasu, one of the country’s three unifiers. He used to pray at the shrine whenever he is set to fight decisive battles. Eventually, he rose to power and was instrumental in finally unifying the country.

In 1600, during the renowned Battle of Sekigahara, Ieyasu finally secured victory. In 1603, he took on the title of shogun. It is this very same year that marked the start of the Tokugawa shogunate. Spanning from 1603-1868, it was more known as the Edo period.

The reign of the Tokugawas is considered a major turning point in Japan’s history. During this time, the country finally enjoyed stability and peace which lasted for two centuries and a half. All of the shogun’s temporal power was transferred to Edo (the old name of Tokyo) where the shogun was. The emperor, on the other hand, continued to take on spiritual functions in the old capital, Kyoto.

A commemoration of modern Japan

Kanda Matsuri was initially known as Tenka Matsuri. It was a way for Tokugawa Ieyasu to celebrate his victories on the battlefield. At the same time, the festival also aims to acknowledge the moral support and help of the shrine to the armies that Tokugawa controlled.

Sanno Matsuri, which is observed every June during even-numbered years, and Kanda Matsuri are the only festivals where the processions are allowed within the Edo Castle grounds or the Tokyo Imperial Palace of today. These days, the festival celebrations span an entire week. Two days, in particular, the weekend closest to May 15, see the height of the celebrations.

When does Kanda Matsuri take place?

The parades attached to the celebration of this particular festival are meant to bring about. Blessings, Luck, and prosperity to Tokyo and its residents. Over the years that the festival has been observed, it has always been closely associated with protecting the capital.

Where does Kanda Matsuri take place?

On the Saturday when Kanda Matsuri is celebrated, an impressive parade takes place through central Tokyo. Among the areas where the procession passes through include Otemachi, Nihonbashi, and Marunouchi, to name a few. It is common for the roads where the parade passes through to get closed partially. Traffic will also often be rerouted to accommodate the grand procession.

Other events related to the festival are also held in other areas in downtown Tokyo. This includes the Kanda Myojin Shrine at Sotokanda, along the Shitamachi area. It’s common for festivities to spill over on the next day, Sunday. However, it is usually at a smaller scale, usually involving 200 different-sized portable shrines.

The festival’s main procession takes place on Saturday. Three portable mikoshi shrines travel on a 30-kilometer course in the former lower areas of Tokyo. Each of these shrines shelters one of the deities enshrined in Kanda Myojin namely: Ebisu, Daikoku, and Taira no Masakado.

The procession typically commences at 8 AM and part of the parade is Otemachi, which is near the imperial palace. It was the original site of the Kanda Myojin shrine. The procession then continues to Marunouchi, Nihonbashi, Kanda, and then Akihabara. Afterward, it will make its way back to the shrine, usually around 7 PM.

If you want to find a good spot to witness the procession, there is a gathering place at Mitsukoshi Department store along Nihonbashi Avenue. However, you do want to arrive early to secure a spot as it can get quite crowded. The parade usually passes by this area at around 4:30 in the afternoon. Make sure to spot the following:

If you have time to spare, head over to Kanda Myojin’s entrance to witness the floats and the rest of the procession return. You will love how the rest of the surrounding area along the Zuishin-mon Gate gets all lively and jubilant around dusk.

The second procession takes place on Sunday. During the event, 200 portable mikoshi shrines, coming from the different neighboring districts near the shrine, take part in the celebration. The portable shrines are meant to represent the various deities that are part of the celebrations.

At 9 AM, the parade— which starts from the respective districts where the shrines come from, kicks off. They will then make their way to the Kanda Myojin Shrine. The whole event is lively and full of energy as audiences shout and cheer to encourage the shrine carriers.

Men and women in their happi garb— a traditional costume worn during Japanese festivals, fill the streets. Some men taking part in the festivities are sometimes seen wearing fundoshi. It is a traditional Japanese underwear commonly worn in Japan until the Second World War.

If you intend to follow the procession during the two-day event, know that it isn’t going to be that easy. While the city does go to great lengths to have areas closed to traffic, some spots may also forbid pedestrian presence. This is to ensure that the processions can pass through unhampered.

The crowd that usually gathers during these celebrations can be quite massive too. Which can significantly limit your movements. A bit of patience and perseverance is needed, if you want to witness the entirety of the parade while still enjoying the festivities.

Most of the activities surrounding Kanda Matsuri these days are concentrated around the Kanda Myojin Shrine, which is located close to central Tokyo’s Akihabara. Aside from the grand parade, expect music and taiko drum performance during the festivity.

Attendees will appreciate the countless shops and stalls serving a wide variety of delicious Japanese food lining the streets where the festival happens. This way, you can keep up with the celebrations as you happily munch on freshly cooked takoyaki balls, yakitori, yakisoba, and a whole lot of other scrumptious street meals to choose from.