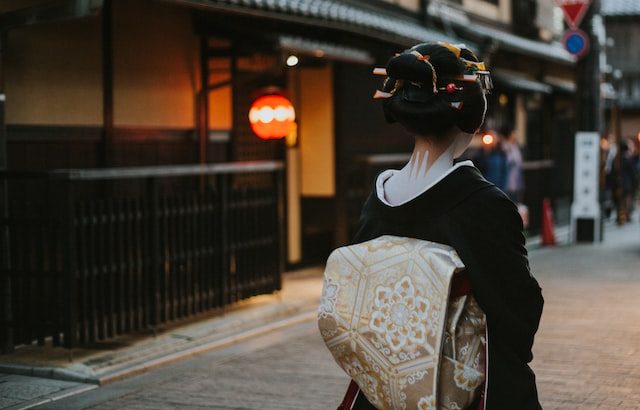 Geisha are professional Japanese entertainers, traditionally hired to act as hostesses at teahouses, banquets, and other social events. With their superb kimonos, red lips, and perfectly made-up faces, they are skilled they perfectly symbolize traditional Japanese culture. Skilled in the traditional arts including music and dance, they are also touted for their excellent repartee.

Well-mannered and always bearing a certain air of elegance around them, the geisha is one of Japan’s oldest professions. It is also one of its most misunderstood. To the non-Japanese, the geisha seem to always hold a certain mystery to them. After all, the world they revolve in seems to be deeply immersed in mystery that even in modern times, has remained as secretive as it used to be.

What is a geisha?

The term geisha refers to traditional Japanese female performance artists. They are typically hired to entertain guests and play hostesses at various social events. Skilled in traditional arts and expert conversationalists, geishas are expected to dance, sing, host tea ceremonies, perform music, as well as serve music and food in the events that they are hired for.

Women wanting to pursue the vocation of being a geisha must first undergo an apprenticeship. Referred as a “maiko” or geisha-in-training, apprentices are required to learn the many intricate skills that the role of a geisha requires. Aside from learning formal hosting skills, a maiko is also expected to learn how to keep the conversation flowing while also learning how to play music, sing, and dance. All in all, it can take up to 5 years to complete an apprenticeship.

Geisha culture originated in Japan. They are often regarded as symbols of Japanese grace and culture with origins dating back to around 1500 years ago. Over the years, geishas have learned to incorporate certain skills that adapt to the modern world. What hasn’t changed though is the same puzzling mystery that seems to surround them and their profession.

Geishas, these days, continue to reside in an Okiya, or the traditional geisha houses. They are still very much skilled in the use of traditional Japanese instruments including the shamisen, shakuhachi, and drums. Present-day geishas are also still expected to master the art of calligraphy, poetry, and traditional songs. Part of their training is to master the Buto, a traditional dance that they learn by attending a Hanayagi school. In the past, girls wanting to be geisha started training really young at 4 years old. These days, however, the training begins during a girl’s teenage years.

In Kyoto, Japan’s old capital, the term is “geiko”. The “ko” in this term means a young person or child. Meanwhile, geisha hailing from the western cities including Kazanawa and Niigata are referred to as “Geigi”. The character “gi” in this term means artistic woman. Regardless of the local terms used by the locals, however, all these traditional Japanese entertainers are identified under an umbrella term called geisha.

While the number of geishas in the country has seen a steady decline over the years, there are still around 600 geishas in Japan today. While not as many, there are still young women drawn to the geisha’s mysterious world. Around half of the country’s geisha are in Kyoto but geisha districts still exist in Tokyo, Niigata, Kanazawa, and Hachioji.

Referred to as “hanamachi” or flower town, the most famous geisha district is found in the Gion District in Kyoto. Several geisha lodging or okiya still exists here and has since become a popular spot for both locals and tourists alike to spot a geisha. Kamishichiken and Ponto-cho are also other hanamachi in Kyoto. In Tokyo, there are six existing hanamachi districts with Asakusa and Kagurazaka being the most popular. Kanazawa has three with Higashi Chaya being the most famous.

Back in the day, male geishas, or traditional Japanese male entertainers exist. In fact, the original geishas were men. Back then, they were known as houkan or taikomochi. While very little known, it is believed that male geishas existed even as early as the 13th century.

It was only in 1751 when female geishas started to exist. They became very highly popular however that after 25 years, they ended up outnumbering the male entertainers. At some point, there were about 600 actively working taikomochi. However, as more and more people sought the company of female entertainers, they eventually dwindled. Today, they have been reduced to just a handful in the country.

Geisha apprentices are referred to as maiko, which literal translation is dancing child. Maikos are typically younger than 21 years old. They then become geiko or geisha once they reach 21. It is common for geiko to wear wigs while maikos often have their natural hair styled elaborately, often with lots of ornaments.

Another way to tell a maiko and a geiko apart is by the way they apply their makeup. For instance, geishas-in-training tend to have more pink blush on. How their lips are painted can also be telling of whether you are seeing a geisha or an apprentice. Junior maikos are known to color their bottom lip red. A senior maiko will usually have both lips painted with a thin line. Geikos, on the other hand, will paint their entire lips. The collars they wear can also be a dead giveaway. While maikos are known to wear white and red collars with intricate patterns, geikos will only wear a solid white.

The trademark look that geishas are widely known for is highly reliant on their elaborately applied makeup. Both the geiko and maiko’s faces and necks are covered in “oshiroi”, a traditional white foundation. The process is so elaborate it can take up to two hours, sometimes more to complete. Geishas also paint their faces with a red lipstick called “beni” along with black eyeliner and red pigments on the eyes. To complete the iconic look, they also paint on heavily defined eyebrows.

What’s interesting about the geisha makeup is how it tends to leave a certain part of the back of the neck uncoated. This is supposed to help elongate the neck. While mainly put on for its decorative purposes, there were also practical reasons for the geisha look. Back in the day, teahouses tend to be lit by candlelight, which made the surroundings rather dim. The geisha’s bright white makeup ensures that their faces are illuminated while performing their duties.

Geisha are not prostitutes

A common misconception, especially among non-Japanese, is that geisha is a term to refer to prostitutes. They are anything but. Geishas do not perform sexual activities for clients. However, there were indeed instances when this happened back in the day. Unfortunately, this seemed to have clouded their reputation with many people believing that they are nothing but traditional sex workers.

While geishas are forbidden to have sex with their clients, there used to be a practice known as “mizuage”. This pertains to clients bidding for a virgin maiko and is considered to be a part of her coming of age. It is only after that a maiko eases into her role as a geisha. Whatever the final bid is, it will be paid to the okiya where the maiko belongs to. She herself will not receive any of the money. This used to be widespread back in the day but has since been outlawed in 1956.

Most modern-day geishas are getting paid by the hour. In the past, however, they were paid through a process known as “senkodai”. This refers to the length of time it took to burn a single incense stick. How much a geisha earns will depend on how popular she is and how many hours she is putting in. As such, in-demand geishas usually charge an hourly rate.

Unfortunately, this does make the geisha profession a bit unstable. Those that choose to follow this path may have to deal with the fact that they will never have any guaranteed income. In addition, maikos, the apprentice geishas do not get paid any salary for the entire time they are training. The okiya they train at does provide them with some sort of allowance. When they graduate, they will be expected to pay off their debt from training at the okiya. Only then will they start keeping whatever money they earn.

Spot a geisha in Kyoto

Kyoto is one of the best places in Japan to see a geisha or a maiko in person. While some people are happy enough to hang around Gion to hopefully get a fleeting glance of a geisha, they do have scheduled performances called “odori” dances which tourists can book tickets for. Miyako Odori is the most famous, having been going on since 1873.

Unfortunately, with little to no interest among younger Japanese women to pursue such a career, there’s been a steady decline in the profession. The strict and lengthy training often put people off the idea of becoming an apprentice. Some fear that it may eventually die out, but it remains to be seen how this profession will fare in the ever-changing tides of modern Japan.