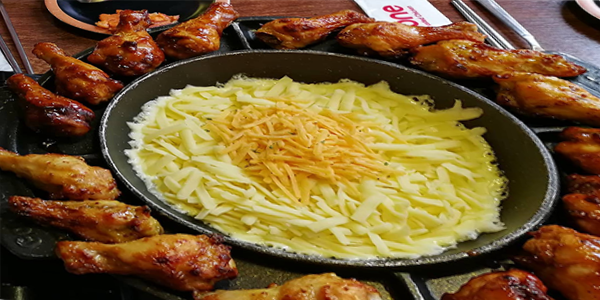 Fondue chicken is what UFO chicken is supposed to be but the chicken is gross, fried badly, and the cheese is tasteless and awful.

Seriously, who invented this stuff?

The worst Korean Food in Japan

UFO Chicken is super popular in Shin-Okubo, and we have no idea why. We hope the idea dies and all these restaurants are replaced with good food.

Tasteless pieces of chicken with very little meat.
A very poor cheese that melted unevenly despite our attention.
A cheesy dipping sauce that was tasteless and gross.

Here are some reasons to hate UFO chicken:

What is UFO Chicken?

UFO chicken is fried chicken fondue. You get chicken wings and drumsticks in a circular dish and the cheese is on the inside. It’s supposed to look kind of like a UFO.

Why is UFO chicken in Tokyo bad?

The worst part of the UFO chicken that we had was the cheese used, which was a tasteless goop without any flavor or savoriness. A good chicken wing can be coated in garlic parmesan cheese and that would be amazing – instead we tasted something akin to hardly wet milk. The pieces of chicken were also very wimpy and meager.

What should I eat in Japan instead of UFO chicken?

Among the best dishes in Japan I highly recommend some chicken katsu, a chicken cutlet breaded with panko breadcrumbs. You can also get chicken age (pronounced ah-gay) which is pieces of fried chicken that are far more meaty and more tasty.