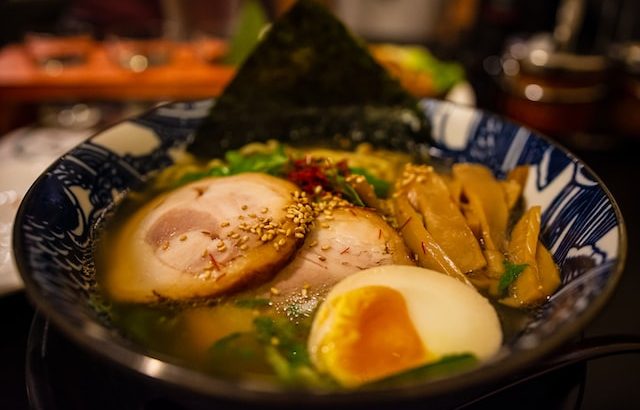 Ramen is one of the most popular foods that Japan is known for all over the world. Delicious and filling, this flavorful dish often features springy wheat noodles in a vegetable or meat-based soup with soft-boiled eggs, pork, and scallions as basic toppings.

While this largely popular dish is connected to Japan, it traces its origin in China. The historical details on how this noodle dish reached the Japanese shores are a bit fuzzy, however. Some believe that a Chinese scholar who took refuge in Japan in the Edo period may have started it all. Other scholars, however, believe that Chinese immigrants first served this dish in the 19th century in Yokohama Chinatown.

Regardless of its origin, however, it is a largely popular food both in Japan and many countries across the world because it is flavorful, delicious, and impressively filling. So popular, in fact, that in 1958, the very first instant ramen was invented. Read on as we take a look at the many flavors of ramen you can enjoy in Japan. We’re quite confident that by the time you’re done reading, you’ll want to head to the nearest ramen shop, dig in, and say “itadakimasu!”.

The four main types of ramen

In terms of classifying ramen, there are four main types based on the base flavor or “tare”.

In the world of ramen, shio (the Japanese word for “salt”) is a very light, salt-based broth that is clear in color, which could typically be chicken or fish stock (dashi). It has a subtle flavor and saltiness, which means that it is easy to pair with other ingredients. This makes for an ideal choice for beginners.

Shio ramen is usually combined with seafood, seaweed, aji tamago (a type of sweet and savory soy-marinated egg), and sometimes green onions. Most establishments that serve ramen in Japan often serve it with takuan (pickled daikon), a mild-flavored Japanese vegetable side dish, typically seasoned with vinegar, sugar, and salt.

Tonkotsu or “pig bones” is what the broth of the tonkotsu ramen is made of. It is a dark, rich, milky-colored bowl of noodles. This is achieved by simmering pork bone broth for a long time to achieve its creamy texture.

Typically, these broths are flavored with soy sauce, garlic, and ginger. This gives them that savory, almost umami taste. The toppings may vary from shop to shop, but the most classic ones are sliced pork, scallions, and a soft-boiled egg. Other toppings you might find in a tonkotsu ramen shop include corn, seaweed, spinach, and mushrooms.

Miso is a paste made from fermented soybeans, and is one of the most important ingredients in Japanese cuisine. It is also used as a base for a lot of different ramen recipes. Compared to other types, miso ramen leans more on the savory and hearty side. However, it is still significantly lighter compared to some of the noodle dishes that other Asian cuisines offer.

When trying out a miso ramen bowl for the first time, what will stand out is its richer color. The base soup is made by mixing miso with water, resulting in a rich and hearty sauce that gives this bowl a sweet and savory flavor. In some cases, miso is mixed with a little meat and fish broth for added flavor.

Shoyu or “soy sauce” ramen is another popular Japanese noodle dish known for its salty soy-based broth. Typically, it is served in a tonkotsu broth, so technically, it is a combination of pork and soy sauce.

The thick, hearty broth is also often mixed with a little fish stock. In some cases, shoyu ramen is made with a lighter-colored chicken or vegetable broth. Compared to the tonkotsu version, however, the lighter version is not as widely available. In addition to the salty broth and the soft-boiled egg, toppings can include mizuna (a type of salad green), wood-ear mushrooms, onions, and sprouts.

Now that we’ve got the big four out of the way, it is time to take a look at other varieties you can enjoy when you’re out and about in Tokyo or wherever in Japan you decide to visit. While the flavors and taste may vary among these options, one thing is for sure— they are no less tasty.

This specialty served in Hakata uses a tonkotsu broth base. The process involves slow-cooking pork bones at high temperatures to release their collagen. The result is a milky and rich broth which is then combined with a bit of seafood stock and served with al dente straight noodles. With toppings of roasted pork slices, pickled ginger, sesame seeds, and garlic, you’ll likely be asking for a second serving.

If you want to taste the best miso ramen, there is no better place to try it than its very birthplace— Sapporo. As a testament to its popularity among the local folks, the city features two ramen alleys! Sapporo’s miso ramen is made with miso, garlic, and ginger sauteed together. The base is a pork broth with toppings of roasted chashu pork, bean sprouts, and bamboo shoots. This is one bowl you’d want to order if you want to get warmed up in the cold Sapporo winter.

Located in northern Fukuoka, Kitakata serves a local specialty featuring fat and wavy egg noodles. The base is a soy sauce or shoyu soup served with basic toppings such as bamboo shoots and chashu pork. Most shops also serve it with naruto, a Japanese fishcake known for its swirly white and pink colors. While noticeably simple, it is the very simplicity of this dish that makes it a favorite as it more than enough meets most Japanese’s requirements of what a good bowl of ramen should look and taste like.

Ramen is one of the first few things to come to mind if you think of Japan. Served piping hot in a flavorful, hearty, and comforting bowl, it is a quick and easy meal that both locals and tourists enjoy.

The many varieties you can find across the country — each with a distinct taste and flavor— are a testament to the unique dining experiences that different parts of the country offer. What’s even better is that no matter the time of the year, a bowl of ramen is always going to be in season.